I discovered an interesting stretch of shoreline when I visited Lyme Regis yesterday. The cliff location is known as The Spittles and it is situated immediately east of the new sea wall. The tide was going out but not as far as in March 2010. Enough to disclose an array of boulders with scattered fossils, broken coloured glass, and rusting metal. The man-made junk resulted from a major landslide in 2008 when the contents of an old town rubbish tip (which had been in existence from 1920 to 1973) cascaded shore-wards with the rocks and mud. The junk continues to wear out of the cliff face to the present time.

There are some interesting items to be found. The rusting metal components, often with remnants of paint, provide intriguing contrasts with the natural environment in which they are lodged. There is a striking similarity between the metal colours and textures and those of the dead and dying autumnal colours of seaweed. As the water receded, it left intricate patterns in the sand around the rocks and even in fine sediments of smoother rock surfaces. 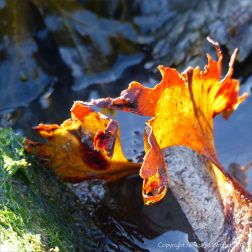 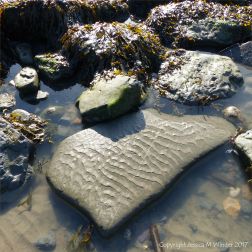 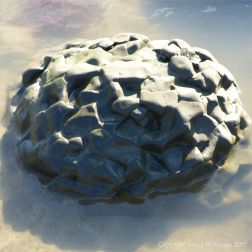 11 Replies to “The Beach Below The Spittles”