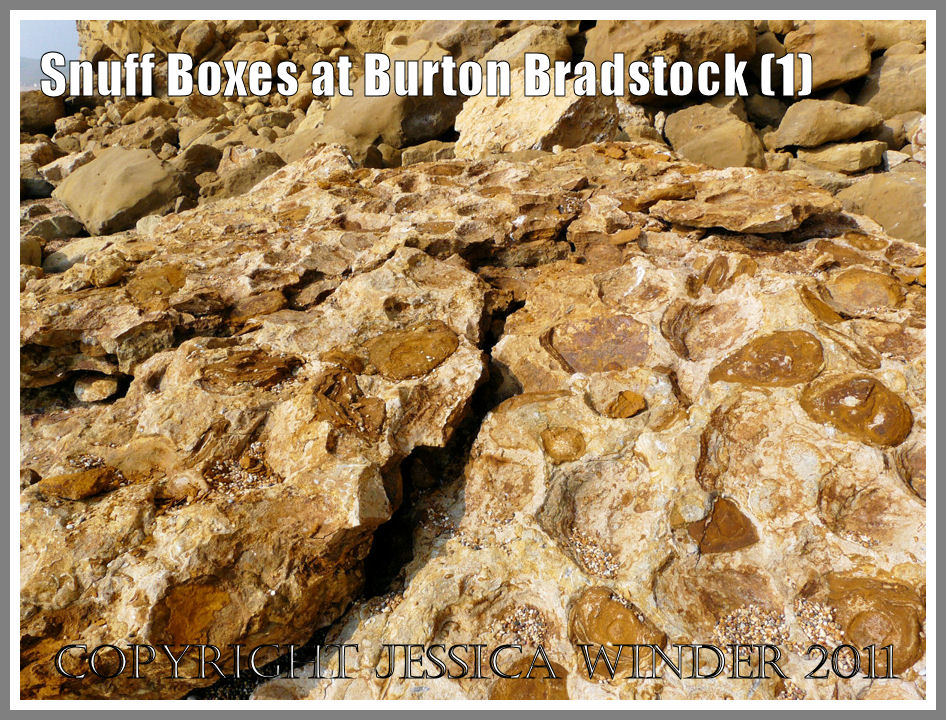 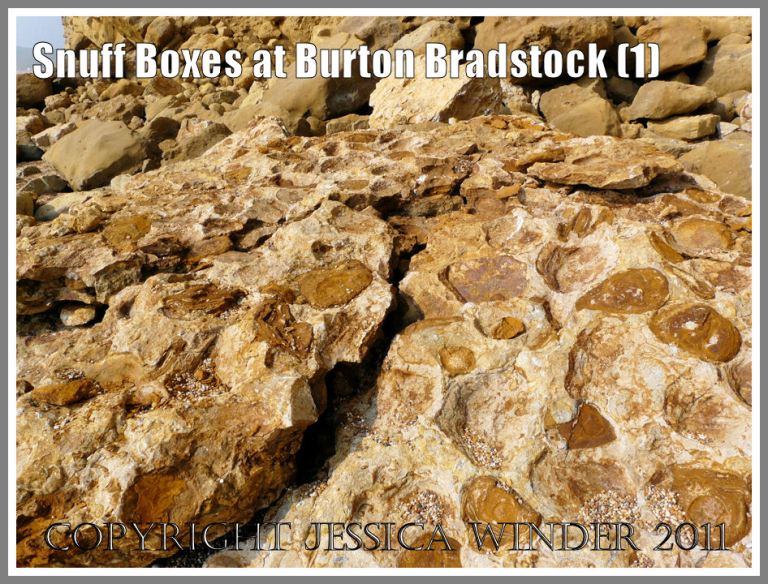 The geology of the Burton Bradstock cliffs is dramatically different from that of the cliffs backing onto Cogden Beach just a mile or so westwards. The Hive Beach Cafe in the opening called Burton Hive marks the transition from soft low crumbly clay cliff to towering spectacular yellow sandstone cliff. What these two types of cliff have in common is their vulnerability to erosion and collapse. Rock falls at Burton Cliff bring to view some amazing rocks which would normally be out of reach to interested observers.

The photograph above shows one of these amazing boulders which have fallen to the beach. This huge rock has dozens of round rusty objects (each approximately 15-20 cm diameter) embedded within its matrix. When I first saw them, I just couldn’t imagine what they might be. 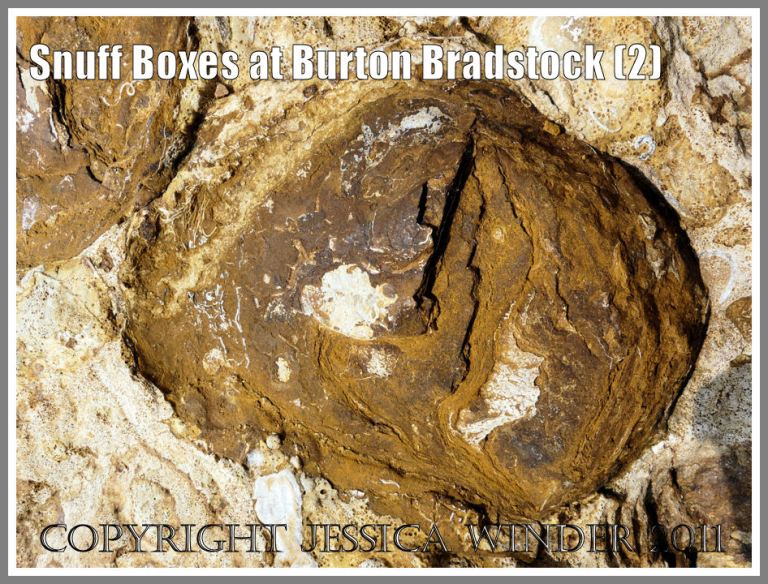 A closer inspection shows that these roughly spherical embedded objects, in surface view, are made up of layer upon layer of corroding iron-stained sediment.

Here, where the rock has broken, you can see a vertical cross-section through one of these round rusty objects. This shows layers rather like flaky pastry in appearance around a central filled cavity. In fact, they look like rusty tin boxes – and that is why geologists refer to them as “snuff-boxes”.

“Snuff-boxes” are found only at the base of the Red Bed, which is one of the Inferior Oolite layers that occur as a darker brown band of strata at the top of the Burton Bradstock Cliff.

It is thought that, when this kind of rock was forming many millions of years ago under the sea, bivalve shells or other objects acted as nuclei for accretions of microbial algae (you can still find these now rare primitive algal stromatoliths today). These accretions eventually were transformed into the unusual ferruginous (iron-bearing) layers of the “snuff-box” features. Shells can often be seen within the boxes. 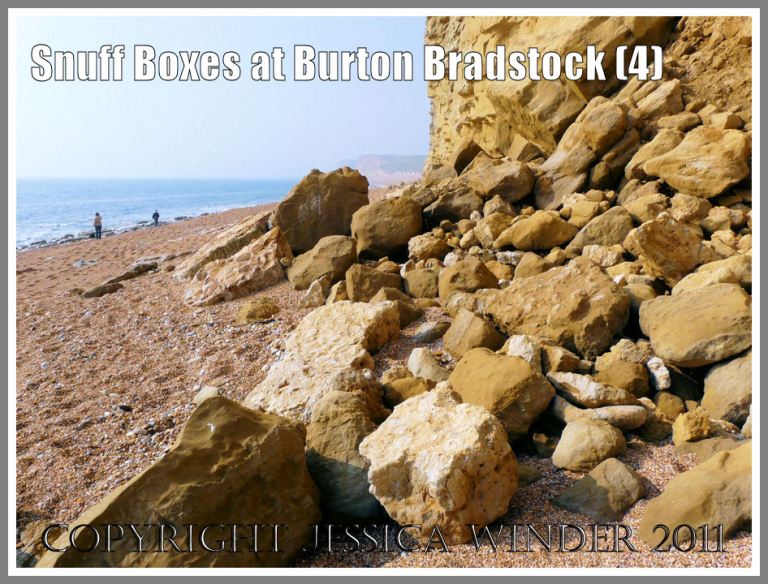 The Burton Bradstock cliffs are stunning. If you have never been there, is is difficult to visualise just how tall and spectacular they are. So here are some photographs to give you an idea of their height and beauty. The picture above shows the rock fall which contained the “snuff-boxes” at the base of the cliff. People are walking along the waters edge about a 100 metres away. 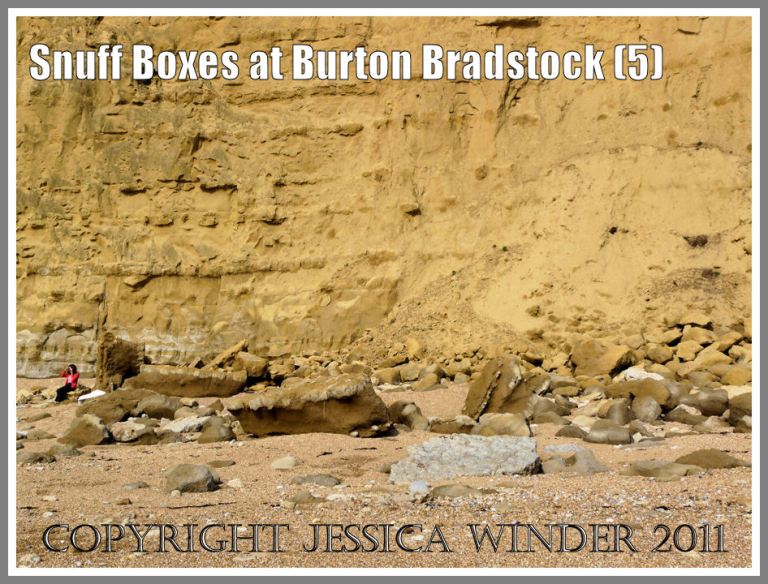 A girl wearing a red top is dwarfed by the huge boulders of the rock-fall debris around her and the towering cliff. 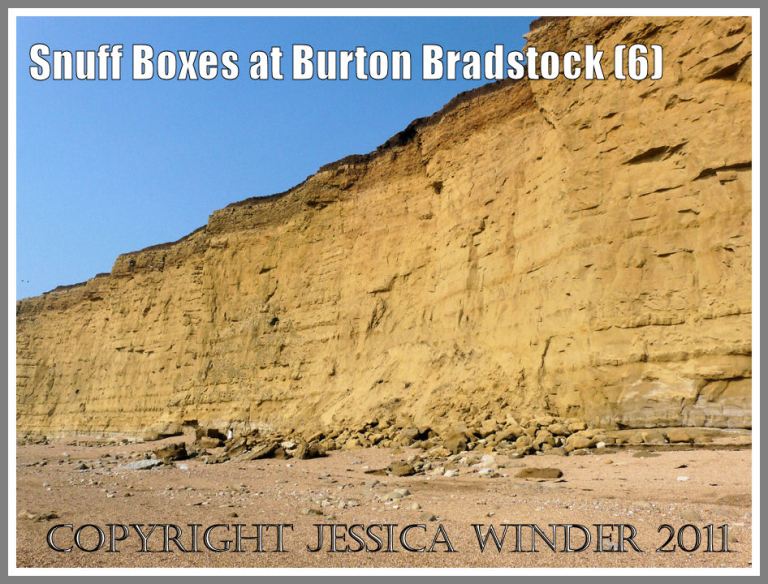 Here the full height of the cliff is apparent while someone dressed in light coloured clothes can just about be made out amongst the boulders at its base. 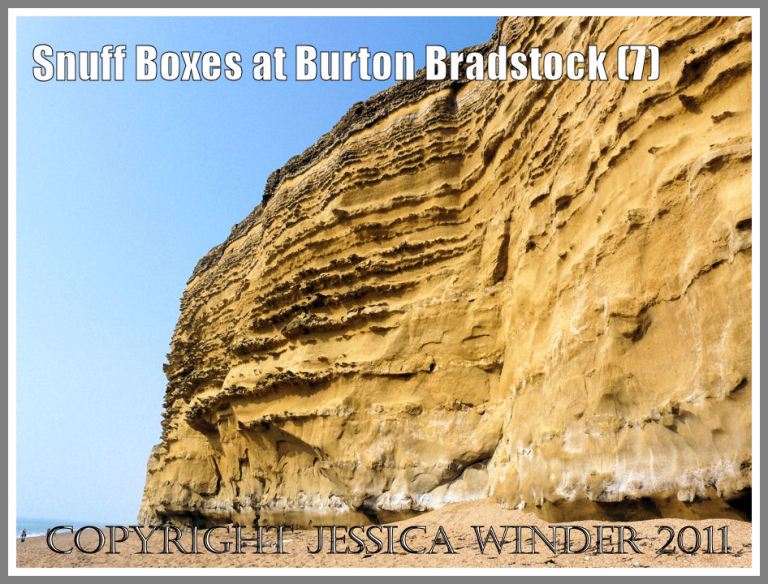 This photograph shows the way that weathering has eroded back the softer bands of the Bridport Sands that make up the greater part of the cliff. They look yellow or orange because of oxidation at the surface of iron-bearing compounds (pyrites) in the rock. Deep down, the unexposed rock is actually a blue/grey colour. Harder narrow bands of calcite-cemented sediment project out from the cliff face as ledges. The photograph below shows these ledges in close-up.

Below, gulls are nesting on the ledges formed by the projecting cyclically-formed calcite-cemented horizons. The birds are just below the darker brown band of Inferior Oolite layers where the “snuff-boxes” came from. Right on top, the cliff is capped with some Fuller’s Earth.

My thanks go to Ian West for his detailed accounts of the geology of the Wessex Coastline from which I have learnt so much about the Jurassic shores.

Any errors in the potted geological explanations that I produce for this blog are mine alone. For the real expert account, you can click here for Ian West’s detailed information about Burton Bradstock . 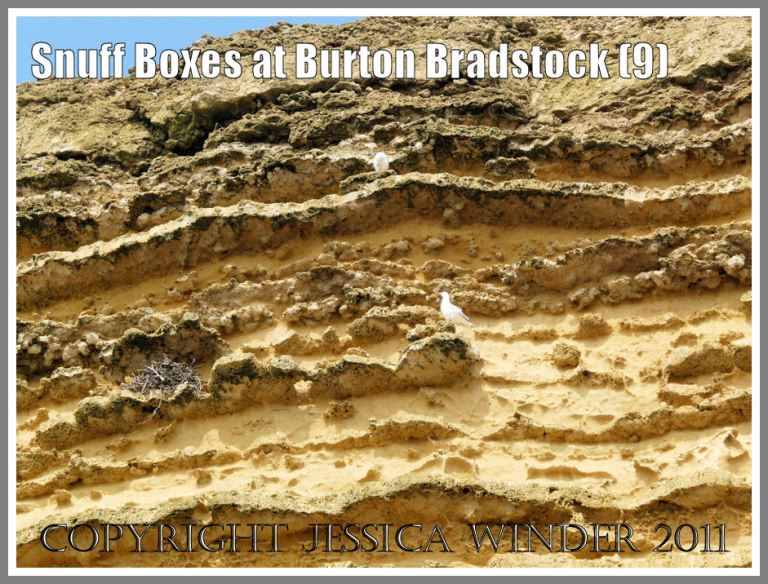