The remains of a recent meal for a bird of prey, this wing with its glossy black, blue and white feathers lay on the wet gravel of the shore as I walked around Chapmans Pool. On the beach, from the boat houses to the base of Houns Tout, it is facinating to see how the composition of both the seashore and the strandline changes quite significantly. The strandline is the debris washed up with each tide. It contains natural materials like seaweeds, and man-made rubbish too. The strandlines were so variable when I visited this beach in June that it is not possible to show everything in one article. So this is the first of several posts that will appear on the topic of Chapmans Pool strandlines.

On the coarse sand, gravel and fine shingles of the east side of the bay, fine sinuous lines of golden and olive brown seaweed were being left by the retreating tide. 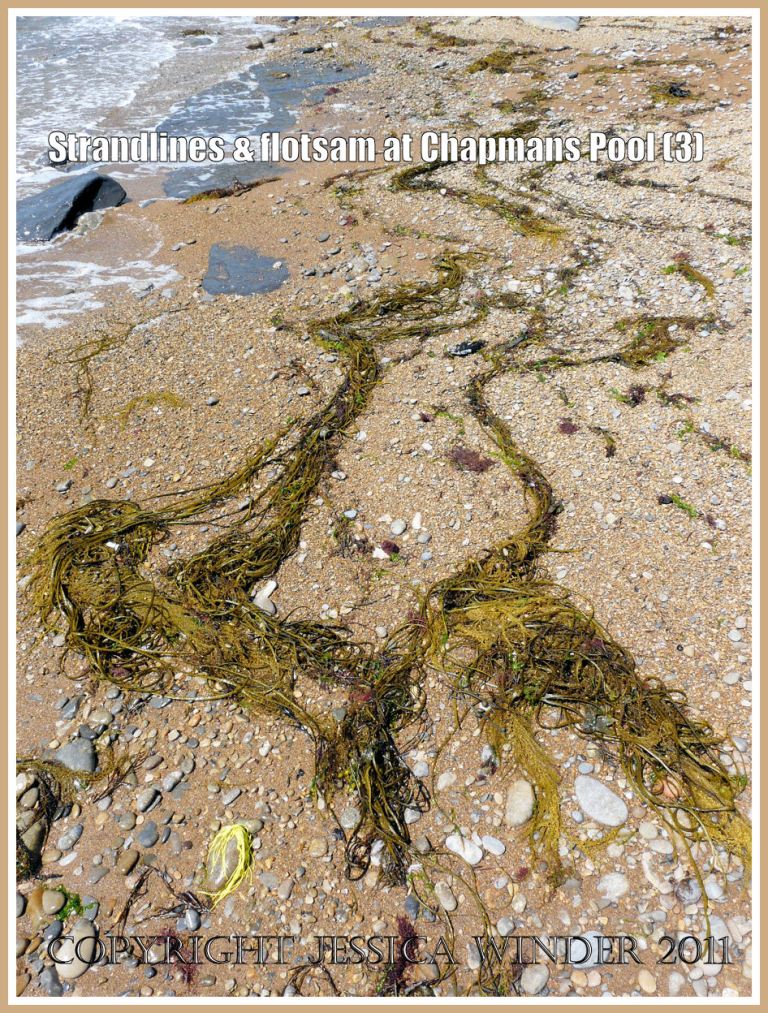 Closer inspection revealed that these twisting strands were made up of Japweed, Sargassum muticum (Yendo) Fensholt, and Thong Weed, Himanthalia elongata (Linnaeus) Gray. Huge beds of these brown weeds (Phaeophycaea) could be seen growing in deeper water – looking rather like brown oil slicks as the weed floated in a layer just under the surface.

Not so many on this beach since the Big Beach Clean in April, but still a few knotted ropes like this green and yellow one washed up on the east shore.

In the north west part of the bay, as you approach the base of Houns Tout and Egmont Point, the seaweed on the strandline is almost exclusively red. I did not attempt to identify the species as they were either banked-up and mixed with gravel as in the picture above, or were spread out but in poor condition. It was surprising that these weeds did not occur anywhere else on that day but were almost entirely confined to this corner.

One Reply to “Strandlines & flotsam at Chapmans Pool (1)”