In the heavy, squally rain of last Friday, I found this really large and weighty living specimen of bivalved mollusc washed up on the sand at Studland Bay’s South Beach, Dorset. It doesn’t look like a common British species on account of its great size…and it isn’t. It is a Quahog – Mercenaria mercenaria (Linnaeus) – which is a native clam of the north eastern United States of America. This type of mollusc was introduced to the British Isles accidentally in the middle of the 19th century. It is thought to have been introduced to our waters by ships such as cruise liners travelling from the States to south coast ports like Southampton in England – maybe surviving when some clams were thrown overboard with other food refuse once they were no longer fresh.

Quahogs have a rounded triangular outline and measure upto 120 mm long, i.e. about 5 inches. They are light brown to grey in colour and have many thin concentric ridges which are raised and sharp at the anterior and posterior ends, and also in new growth areas, on the outside surface of their thick shells. The ridges are smoother in the middle of larger shells. In front of the rounded prominences known as the umbones there is a beautiful, distinctive, and striated heart-shaped area called the lunule where the left and right valves join. Quahogs live in mud on the low shore or just off-shore.

The photographs show this lovely creature from various angles and as it was first seen on the beach. This magnificent mollusc was returned to the sea – I am not sure how rare it might be in this location. 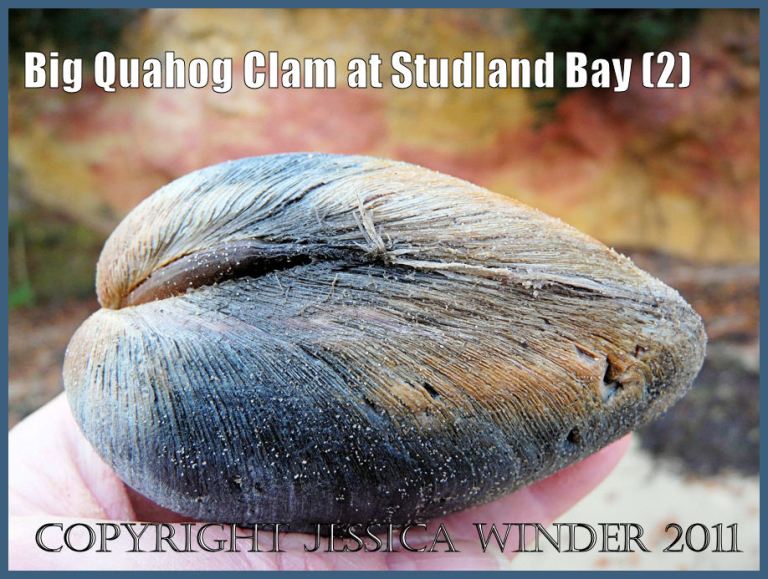