A typical recent rock fall from the cliffs at Kimmeridge Bay in Dorset. This site is world famous for the sequence of Kimmeridge Clay strata on display in the cliffs and on the beach – as well as being part of the World Heritage Site known as Jurassic Coast. The almost horizontal bands of  alternating soft and hard rocks are clearly seen in the vertical faces of the cliffs while the more resiliant rock layers extend as platforms or pavements across the seashore and protrude out to sea as the well known Kimmeridge Ledges.

The geology of the bay is fascinating but quite complex. I recommend that anyone really interested in unravelling its mysteries consult the Web Pages written by Ian West. These are full of illustrations, descriptions, maps, charts, historic photographs and detailed academic information and references for the Wessex coastline – primarily written for university geology students I think. So for information about the geology of Kimmeridge Bay see this most excellent academic guide written by Ian West of the National Oceanography Centre in Southampton University.

The close-up photograph below shows part of the cliff close to the point where the path and stream lead down from the western part of the car park to the shore, near to the so-called Washing Ledge. The harder more solid bands of rock (bituminous shale) project from the face of the cliff while above and below them much finer-bedded friable mudstone sediments have been deposited. 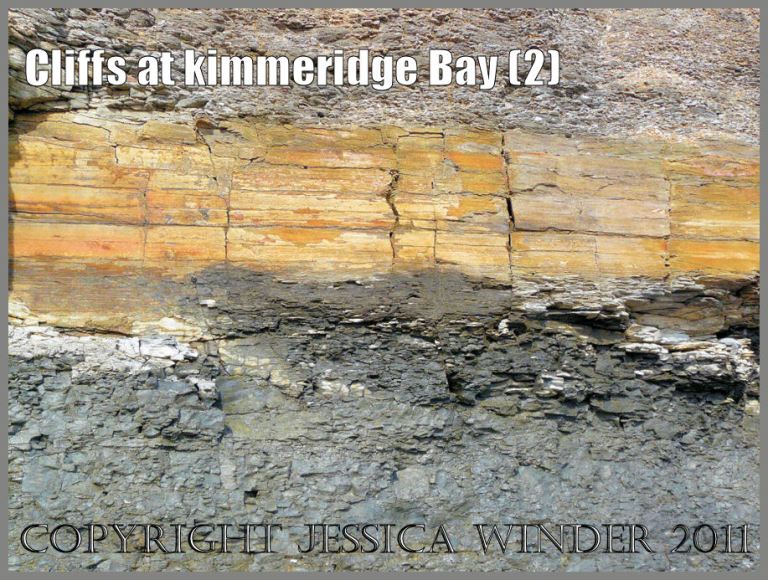 The hardest layers of rock are dolomite which comprises large but variable proportions of calcium together with iron, manganese and magnesium. The pavements in the intertidal zone and the ledges stretching out into the sea are made of dolomite. The ledges in different locations have been given different names. For example, Maple Ledge lies towards the eastern end of the bay in the direction of the Visitor Centre of the Purbeck Marine Wildlife Reserve. Washing Ledge is in the middle of the bay as mentioned. The Flats is a bit further on, then Charnel and eventually Broad Bench at the western tip of the Bay.

More photographs and information about the seashore creatures, seaweeds, and rocks will be given in following Posts about my March visit to Kimmeridge.

2 Replies to “The cliffs at Kimmeridge Bay”