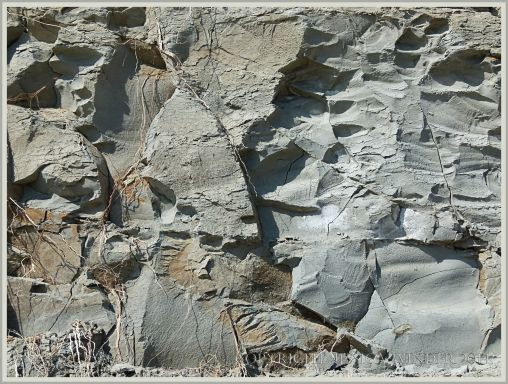 Sandstone with nodules in a beach boulder at Eype 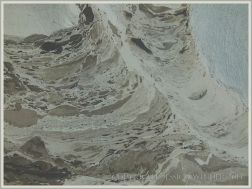 The dried surface of a recent mud-slide from the blue-grey Eype Clay Member, incorporating pea-sized gravel from the beach, and with larger pebbles resting on top. 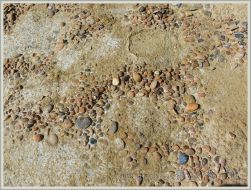 Ferruginous sandstone with fragment of bivalve fossil at Eype

Bivalve shell fossils in sandy marl in a boulder on the beach at Eype. 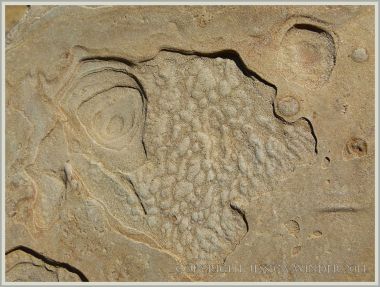 The interesting thing about Eype Beach is that you don’t have to climb the cliffs to see the rocks in detail – the rocks come to you! Boulders of sandstone and limestone from high in the cliffs regularly collapse to the beach, which becomes strewn with them, and affords an opportunity to examine the composition of, and the fossil content of, the variety of rock types represented in the strata above shore level. Even the low, thick band of softer mudstones and shales slips down on a fairly regular basis, and liquified by small streams, oozes over the shingle of the upper beach.

It’s going to take me a while to work out which rock is which. However, I can say that Eype Beach has two different geologies more or less separated at Eypesmouth where a small stream cuts its way down a steep-sided valley through the predominantly soft rocks. If you turn right and westwards where the stream breaks through to the shore, and walk towards Thorncombe Beacon as I did, then on your right-hand side are cliffs made up of several virtually horizontal rock strata of different types of sedimentary rock. The lowermost layer, nearest to the level of the shingle beach, is a 55 foot depth of blue-grey Eype Clay Member made up from micaceous silty mudstone and shale – also called  the Micaceous Beds – from the Middle Jurassic Period.

Above the blue-grey mudstone, are the yellow layers of silts and sandstones of the Down Cliff Sand Member and the Thorncombe Sand Member – with sporadic fossil beds, and thinner bands of calcareous sandstone and ironshot limestone. You can easily see the contrasting colours of the different rocks in the cliff face.

I had hoped to find some brittle star fossils, that was the main aim of the visit, but I wasn’t lucky on this occasion. It was rather hot on the day and I don’t think I walked far enough along the shore to be in the most likely location. The Starfish Bed with Palaeosoma egertoni is at the very base of the Down Cliff Sand Member which itself overlies the Eype Clay Member. Large blocks of this rock fall to the beach – but you have to hope that the block has fallen the right way up for you to see the brittle star fossils, and also hope that a professional fossil hunter has not got there before you! I’ll have to keep on keep searching.

It was clear that many types of rock were identifiable on the beach; even the modern mud-slicks and clay seepages were interesting because they demonstrate and replicate the same  processes that would have contributed to the textures and patterns of the ancient rocks. As the soft muds dried out in the sun, the surfaces were beginning to form a crazy paving patchwork of cracks – the same as could be observed in nearby slabs of rock. As the liquified clays dribbled outward from the base of the cliff rock exposure, they incorporated assemblages of small pea-sized pebbles and who-knows-what man-made objects that might end up in rock strata of the future.

So the gallery of pictures today just shows details of a small selection of the rocks and sediments to be found on Eype Beach with a range of the natural textures and patterns they exhibit. It’s the starting point for the Eype geological learning journey.