From a distance, I could see large white blotches on the wet rocks as the tide uncovered Worms Head Causeway. On closer inspection they looked like great lengths of coiled tape-worms. It wasn’t until I actually noticed the small brown creatures congregating around these glistening masses that I realised they were egg masses – which were, at that very moment, being created by Sea Slugs (Nudibranchs – marine molluscs without obvious outer shells). This was something entirely new to my experience of exploring seashores.

Apparently, each Sea Slug is hermaphrodite (both male and female) and so is capable of being fertilised at the same time as fertilising any other of the same species. The millions of microscopic white eggs being produced from the pairings of the sea slugs are coated with a clear mucilaginous coating to form long white slimy ribbons arranged in loose spirals.

The Sea Lemon, Archidoris pseudoargus, is said to be the most common variety of sea slug that you are likely to encounter on the Worms Head Causeway. However, these photographs of mine show groups of much smaller and flatter animals than might be expected if these specimens were Sea Lemons – which are more rounded and can grow to 120 mm in length.  These, obviously mature, mating congregations of individuals that I was witnessing seemed to be about 20 – 30 mm long with a warty, patchily-brown surface. The upper surface of the creature is the mantle (which in gastropod and bivalve molluscs would produce the hard outer shell). Here the mantle is covered with large rounded clear unpigmented tubercles.

I think the specimens of sea slug I saw belong either to the Family Onchidorididae. I have consulted the key –  British Opisthobranch Molluscs by T.E.Thompson and Gregory H. Brown in The Synopses of the British Fauna (New Series) No. 8, Published for the Linnaen Society of London by Academic Press, ISBN 0-12-689350-0.

Using just my photographs for the identification, it doesn’t seem possible to make out all the necessary diagnostic features but I think my specimens resemble Onchidoris bilamellata (L.). This species may reach 40 mm in length, has blotchy brown markings on the dorsum with abundant club-like tubercles of various sizes but without pigment. It feeds mostly on acorn barnacles (there were plenty around where the sea slugs were mating). It has also been recorded all around the British Isles. I am unable to find a reference to this particular species laying eggs in coiled ribbons but it is a mentioned feature in many other species in this group..

I could well be wrong about this identification. It is a tentative one. So if you know better, please do get in touch to tell me what you think.

For a wonderful collection of underwater photographs of marine invertebrates, including a variety of Sea Slugs species, pop over and visit Jason Gregory’s site at  British Marine Life Pictures. 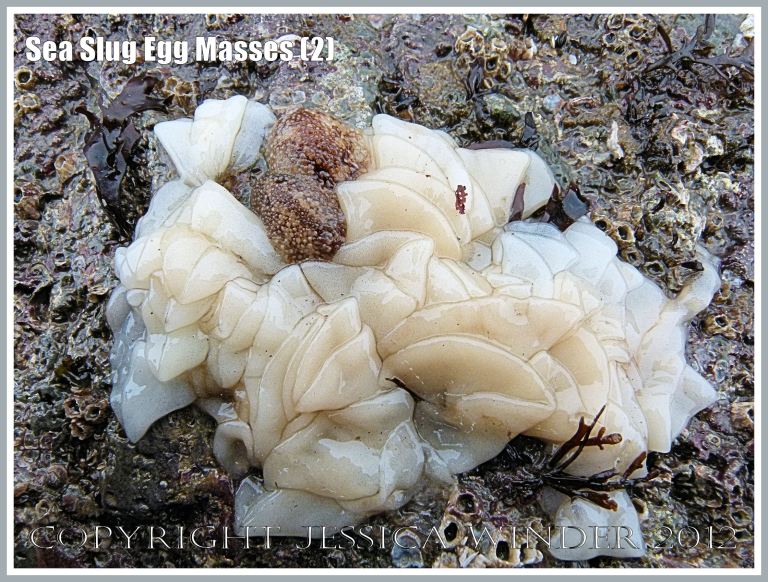 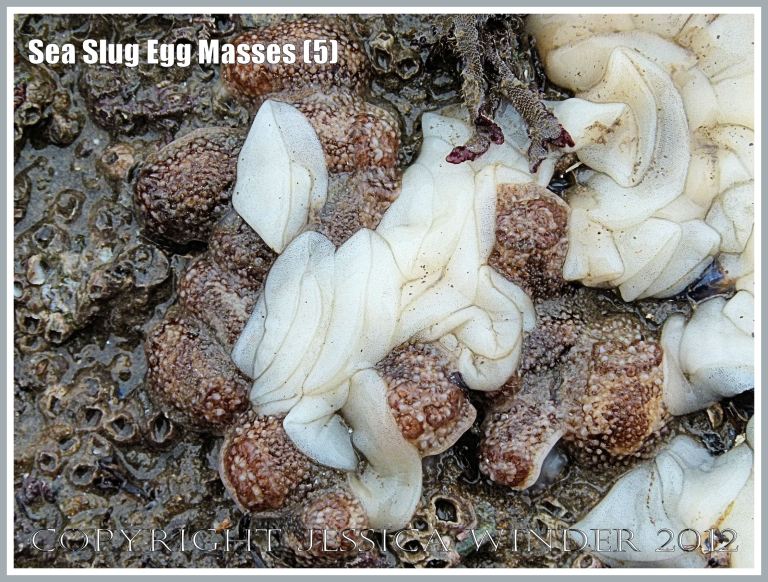