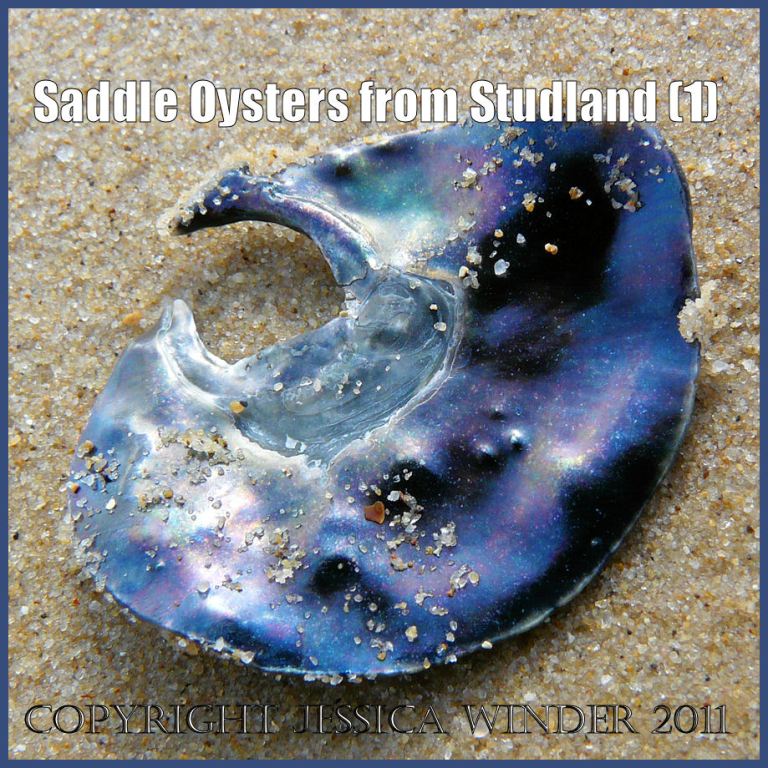 The beautifully iridescent interior surface of a Saddle Oyster shell (Anomia ephippium Linnaeus) found on the sand at Studland Bay, Dorset, UK. This is the right-hand flat shell of a bivalved mollusc. It is characterised by the large rounded opening on the hinge side. The living animal produces a chalky stalk or byssus that extrudes through this opening in the shell in order to fix the animal securely to a firm substrate. Sometimes this is a rock but other times it can be another living mollusc or an empty shell. This species is commonly found on oysters. The shell shape is moulded to that of the object to which it is attached – hence the allusion to ‘saddle’ in its name.

The dark base-colour of the shell has been acquired after the death of the original living mollusc and is due to staining of the shell during burial in anaerobic sediments (see the Post on Black Oysters of 26th February 2009).

In contrast, the left-hand valve of the saddle oyster is a shallow cup shape instead of flat; it also lacks the byssal opening typical of the right valve. Characteristic of the species are the three paler, roughly circular, marks on the interior surface which are the scars of strong muscles attachments; in life, the muscles are used to close and keep the shells tight shut.