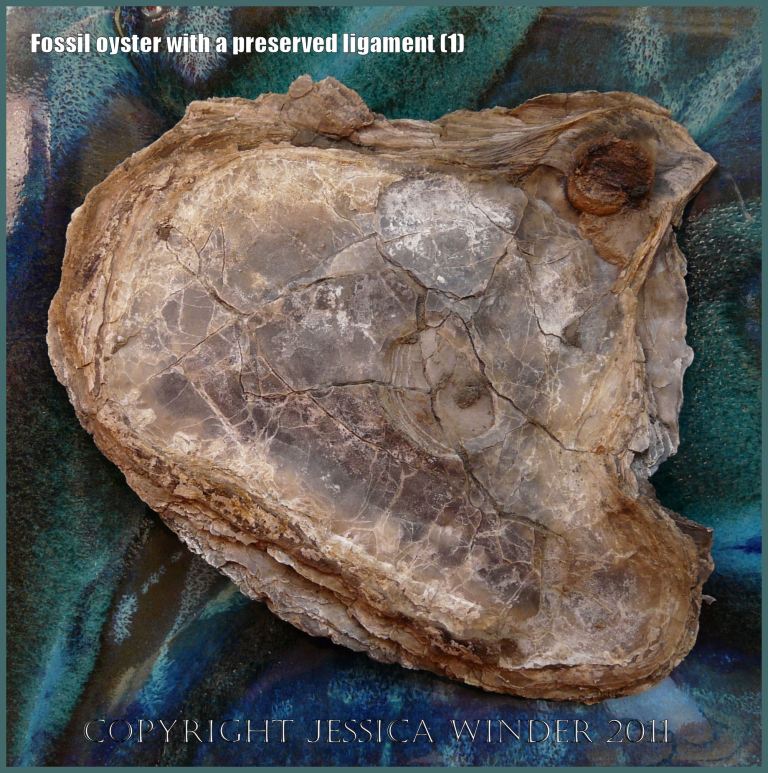 In oysters the ligament is a distinctively triangular shape and occupies a depressed area betwen the two beaks of the shell. It has an inner, central area, and an outer area to the front and the rear. It has very strong resilience and serves to keep the two valves apart so that water can circulate inside the animal cavity. When the oyster is at rest, the two shells gape slightly open because of the ligament. The oyster has to actively contract the large centralised adductor muscle to shut the shell. It would need to do this, for example, if it was exposed to air at low tide.

The ligament is continually being formed on its inner edge  – in the same way that the shell is being added to, day by day. Both ligament and shell are manufactured by the mantle (which is so-called because it wraps like a cloak around the entire oyster animal inside the shells). The outer edge of the ligament is continually wearing away because of the physical stresses of compression and and extension that it experiences while functioning. The effect of the on-going destruction of the ligament at its outer edge is that the position of the ligament moves inwards, leaving an empty outer ligamental area, where all that is visible is the growth lines in the shell.

In a freshly opened oyster, the ligament is brown, changing to grey, the consistency may resemble that of  thick toe-nail or perhaps a bit like hard toffee.  There is a picture of a shell – dredged in 1989 from Poole Bay in Dorset UK – at the bottom of this posting, showing the dried-out remains of the ligament still attached.

In larger, thicker, older, oyster shells, the ligament can survive for hundreds of years – given the right burial conditions. I include a photograph at the bottom of the article showing the remains of a ligament on an oyster shell recovered by excavation from an archaeological site dating to the Saxon period in Southampton, UK, about 1,200 years ago.

Fossilisation preserves the hard parts of shells. This can be by replacement of the actual minerals in the shell, or by a mould or a cast of the shape of the shell. Recently, I discovered a Jurassic fossil oyster at Ringstead in Dorset, UK, still with the pair of matching valves together. I found when I separated the shells, what I think must be, the remains of the ligament still attached to the inner surface each shell after 135 million years. Amazing.

The ligament, if it is indeed the ligament, has been replaced by iron pyrites or a similar metallic compond. In the close-up photographs it is possible to imagine some internal structuring in the ligament, like the cross-sectioning of fibres, but this may simply be a feature of the mineral replacement. I have no idea how common ligament preservation in fossils might be. I would be delighted to hear from anyone who could comment on this apparently unusual occurrence.

5 Replies to “A fossil oyster with a preserved ligament”