However wintry and bare a beach may seem, the odds are that there will be seaweed somewhere. It may be stuck fast to rocks or lying on the strand-line. Wherever it is found, it is very likely providing food, protection or a habitat for some other seashore life forms.

If you push aside the fronds of seaweed that are attached to rocks, you will probably find limpets also living there – sheltering amongst the stalks. [The limpets photographed above were spotted in this kind of situation on rocks at the base of White Nothe at the eastern end of Ringstead Bay in Dorset]. This is an ideal location for these molluscs because they have an abundant food supply – they feed on the seaweed. They are protected by the seaweed from the worst of the pounding waves and also the drying out effect of exposure to air at low tide.

There is more than one type of limpet. They are not always easy to tell apart without looking at the muscular fleshy foot underneath the conical shell. And if you have ever tried to remove a limpet from a rock, you will know that this is no easy task. Limpets clamp down quickly to their base as soon as you touch them. Your only hope is to creep up on them and give a quick sideways knock to dislodge them. But that seems very unkind and would be traumatic and potentially damaging for them. So I don’t reccomend that you do this. Any way, that is why I am not always sure exactly which species I am looking at.

On the same February trip to Ringstead when I snapped the limpets, I spotted some interesting little animals attached to freshly uprooted Fucus seaweed on the driftline. You can see a picture of them below. At first glance these small, white, coiled, and chalky-looking objects about 3-4mm across look like snail shells of some sort. In fact, they are the calcareous, spiral tubes occupied by a particular type of marine worm known as a Spirorbid.

The tube containing the worm in Spirorbids is a tight coil lying flat against the substrate to which it cements itself. The spiral can be either clockwise or anticlockwise depending on the species.  The substrate on which the tubes are found can be particular to that species

I think the examples shown in the picture could be Spirorbis spirorbis (Linnaeus) which likes to live on large brown seaweeds (Phaeophyceae) – especially the Toothed Wrack Fucus serratus Linnaeus – but also kelps. 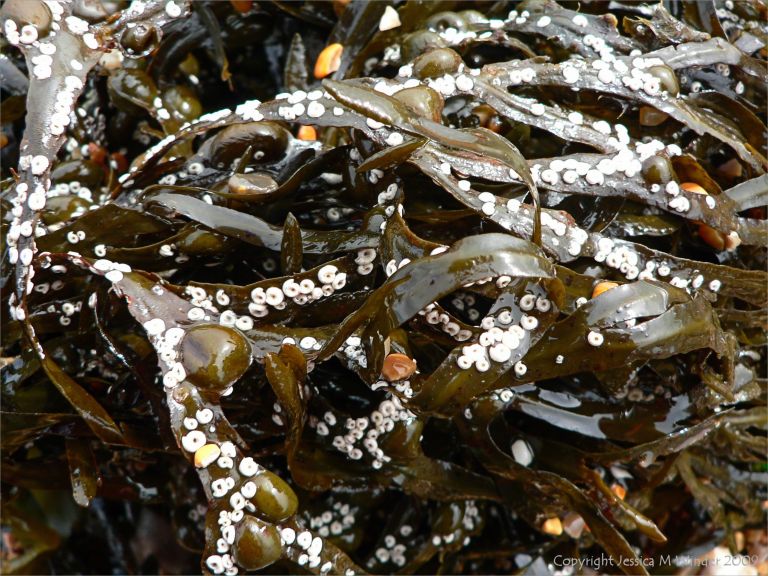 3 Replies to “Limpets & tubeworms at Ringstead in February”