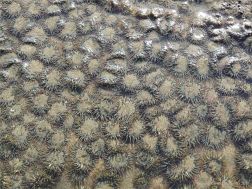 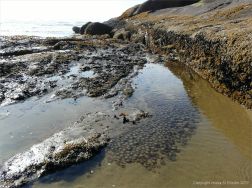 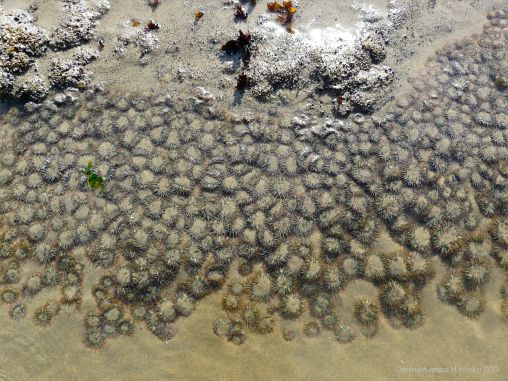 When I first saw these anemones half-buried under the sand on the beach near Yachats in Oregon, I thought “what a pity”. The pink-tipped green tentacles formed rings protruding from the substrate but I assumed that being mostly covered by sand would suffocate the creatures or prevent them from feeding. But I was wrong. This is just the right kind of situation for this particular species to thrive.

It is known as the Aggregating or Surf Anemone (Anthopleura elegantissima). It attaches to rocks but loves the sand when it lives intertidally. The anemones are all rather crowded together, and this is natural too, because they all belong to a colony that has been derived from a single individual anemone – they are genetic clones (most of the time). That is, they multiply asexually by dividing into two individuals ad infinitum (although they can reproduce sexually sometimes).

When one colony expands so much that it meets another colony, a battle takes place for possession of the territory. The anemones along the margins of the colony fire stinging darts at the adjacent colony to define the boundary and prevent it from encroaching.

One Reply to “Aggregating Anemone”