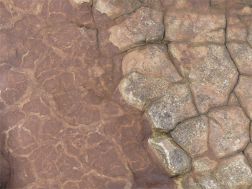 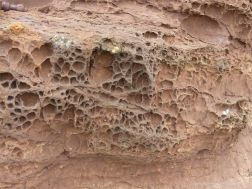 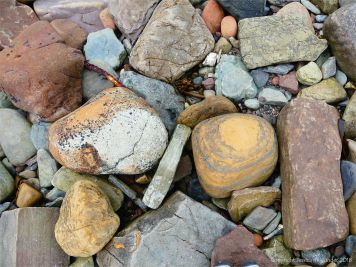 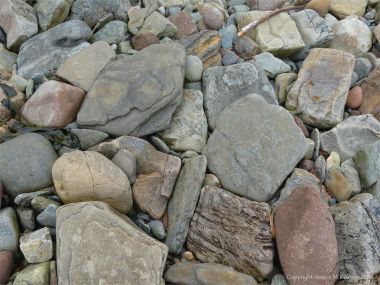 Weathered sedimentary rock textures from the Devonian Eday Group belonging to the Old Red Sandstone Supergroup exposed on the west side of Newark Bay in East Mainland, Orkney. I love the honeycomb effect achieved by wave and wind action on the cliffs. Harder parts of the rock survive longer than the softer ones and remain as interconnecting ridges. On the shore at the base of the cliff, where the red rocks spread out as a level surface, you can see reticulated patterns of a different colour in the stone. These could be infilled burrows made by marine invertebrates like crabs as they tunnelled through the sediments when they were still wet and unconsolidated in the past. Or the patterns might relate to the way the sediments dried out and cracked when they were exposed to air. Water levels were continually fluctuating when these sediments were being laid down.

You can also see how the character and composition of the layers changed over time. There is a very distinct paler coloured layer sandwiched between the red ones. This is divided up into polygonal pieces looking like cobble stones on an old street. These could also be cracks from dessication. I have included a picture of the Sea Thrift which flourishes on the cliff top, the green and pink colours of which provide a striking contrast to the rocks. The cobble-sized beach stones and boulders lying between the high and low tide levels obviously come from many sources other than the nearest bedrock. Many will have moved around the coastline from rocky outcrops of different kinds of Devonian sedimentary strata and intrusive igneous rocks. Some will no doubt have been transported from far away by ice sheets and been deposited on the spot by melting ice as the sheet retreated.