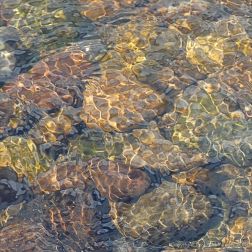 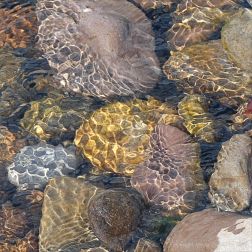 Diles Lake is a actually a stream that drains the Llangennith Marsh, cuts through the sand dunes known as Llangennith Burrows, and flows across the beach into Rhossili Bay. Sometimes the water is extensive on the seashore and spreads out into a wide area of many channels as soon as it is released from its narrow passage through the Burrows – hence the reference to “lake”. This August the flow was greatly reduced because of the lack of rain this summer. The channel was the narrowest I have seen and very easy to cross. It was a bright sunny day and the water trickling over the multicoloured pebbles was marked by myriads of continually changing patterns as the ripples caught the sunlight.