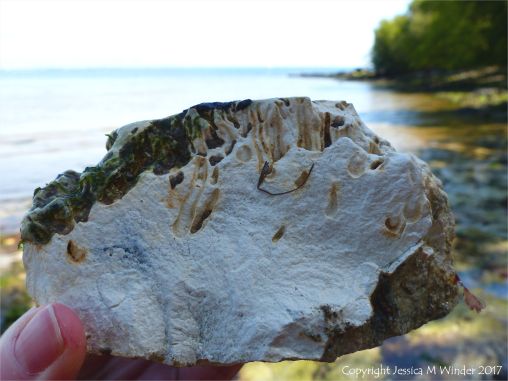 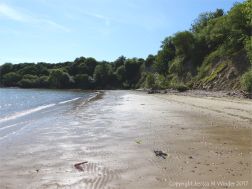 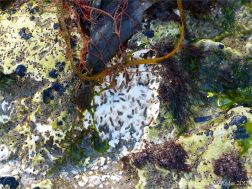 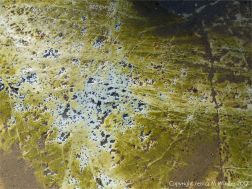 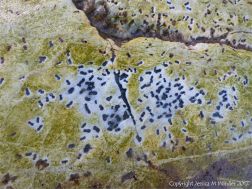 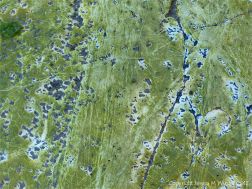 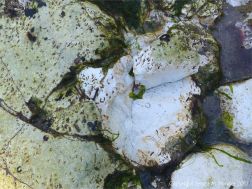 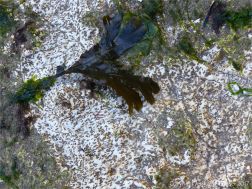 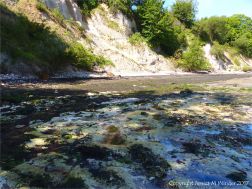 In the corner of South Beach at Studland in Dorset, where the chalk cliffs that lead to Old Harry Rocks meet the seashore, the Studland Chalk Formation bedrock extends over the beach as a flat wave-washed platform. The smooth white rock surface is exposed at low tide but is frequently covered by sand, pebbles and decaying seaweed. On a recent visit a lot of the weed had cleared and I was able to observe the chalk platform closely. I realised that it is riddled with small holes and tunnels made by marine polychaete worms.

The holes on the surface of the rocks are roughly dumb-bell shaped and a few millimetres across. You can tell the worms are still living and occupying the burrows because the combined mucous and mud tube-linings remain intact. In locations where the rock has broken, the shape of the tunnels leading down into the rock from the holes on the surface is revealed. The tunnels or burrows are approximately U-shaped. The worm lies in a doubled-up position in the burrow with both the head and the rear end at the rock surface. When the tide is in, and water covers the burrow, the worm protrudes and vigorously agitates its two long, thin, ciliated palps (feelers) to gather particulate food floating by. Waste matter is expelled into the water but it is probably the overall acidic environment created by the metabolic waste products that gradually dissolves the calcium in the rock to create the burrow.

The accurate identification of these worms is problematical since the most diagnostic parts are usually discarded by the animal as soon as the creature is extricated from its burrow. However, it is likely that they are bristle worms of the Spionidae family, probably the Polydora genus, and possibly Polydora ciliata (Johnston).