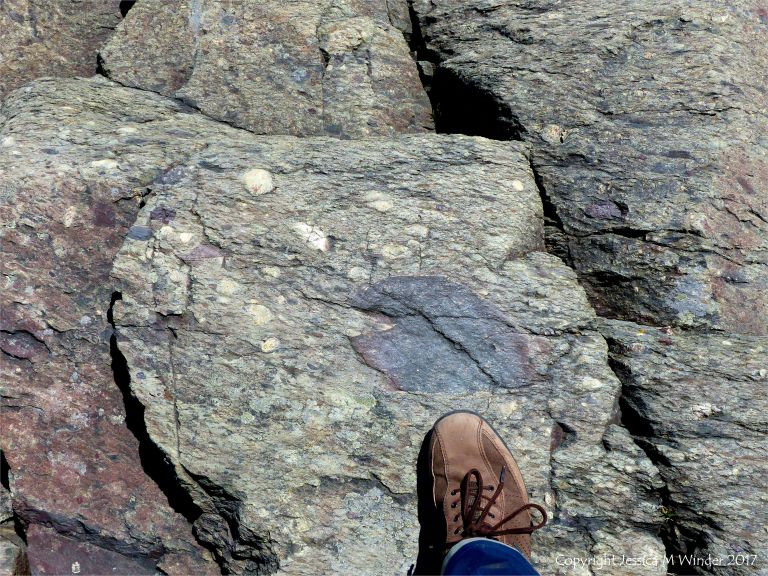 The entire coastline north and south of Louisbourg on Cape Breton Island in Nova Scotia, Canada, is composed of Neoproterozoic volcanic rocks dating back 575 million years. A few hundred metres north of the Louisbourg Lighthouse along the Trail to Morning Star Cove and Gun Landing Cove, lies an area of seashore that offers the chance to take a close-up look at the compositions and natural patterns in rock made of pyroclastic breccia.

Pyroclastic literally means ‘fire-broken’ and is used to describe volcanic rocks made up of fragmented pieces that are normally the result of an explosive volcanic event. Clasts are pieces of broken down rock. According to the Oxford Dictionary of Earth Sciences edited by Michael Allaby (ISBN 978-0-19-921194-4) “breccia is a coarse clastic sedimentary rock, the constituent clasts of which are angular. Breccia literally means rubble and implies a rock deposited very close to the source area. The term may also be applied to angular volcanic rocks from a volcanic vent.

Rock of a similar type of origin, although not identical, has been used by the sculptor Emily Young in the creation of the carved heads that were recently on display on Neo Bankside in London. Stillness Born of History II is described as being made of “onyx with volcanic pyroclastic brecchia”.