Just before the Pennard Pill watercourse takes a dramatic swing to loop around the giant sand dune to get to the shore at Threecliff (Three Cliffs) Bay on the Gower Peninsula, the right hand or west bank is composed of rough stones and then transitions into a salt marsh. [The area lies on the opposite side of the river to a more substantial and higher shingle bank that can be reached via a set of concrete stepping stones].

The low shingle surface of the right bank is relatively stable. Despite regular tidal inundations of brackish water, life clings to the limestone. Last August it was particularly attractive, covered with bright patches of yellow and black lichens, and ground-hugging clumps of partially red-stemmed plants with clusters of small pink flowers. I will have to find out what these plants are the next time I visit. I didn’t take close-ups. I had thought they might be Sea Heath (Frankenia laevis) but apparently that does not grow in this area – although it likes the same kind of habitat.  I think Sea Sandwort was also present. However, the numerous flowering stems of Sea Lavender I did recognise; and these plants were found equally spread in stony ground and on the wetter salt marsh area. 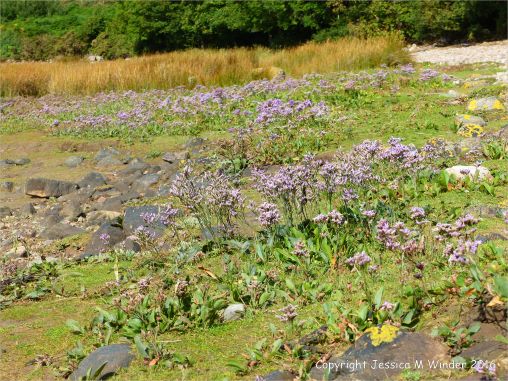 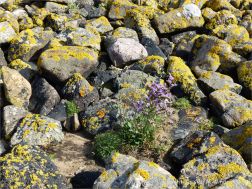 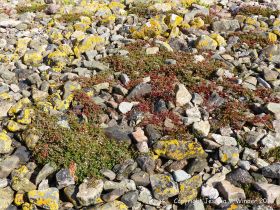 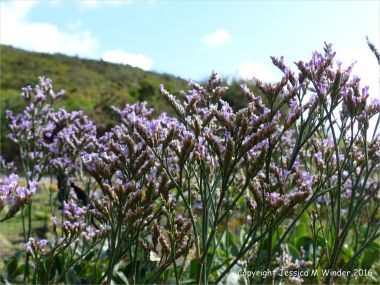 3 Replies to “The stony west bank of Pennard Pill”