I found several small, fibrous, ovoid husks washed up on the shore at Trinity Beach and Normanby Island when I visited Queensland in Australia; and I wondered what they were. Sometimes, the fibres were still covered and contained by a tough leathery blackened skin with an unusual keel extending around the perimeter of the fruit. They had obviously lain on the beach and floated in the sea for quite a time. I couldn’t work out what they were.

It was not until I was enjoying a cold drink at a beach-side cafe in Port Douglas that I found the answer. A ruckus drew my attention to a tree in which a group of black parrots were noisily squabbling over fruits. Clusters of bright green fruits of the same peculiar shape and size as the flotsam specimens were growing high on the branches and also lay scattered whole, opened, or half-eaten on the ground where the parrots had dropped them. They were Beach Almonds.

The fruits belong to a family of trees (Combretaceae) common in the tropics. The Genus Terminalia has about 200 species, and I think it likely that the fruits I found were from one of the three most common species on the beaches of northern Queensland, Terminalia catappa, T. arenicola, or T. seriocarpa. The fruits are described as being canoe-shaped and ripening from green to blue-purple. 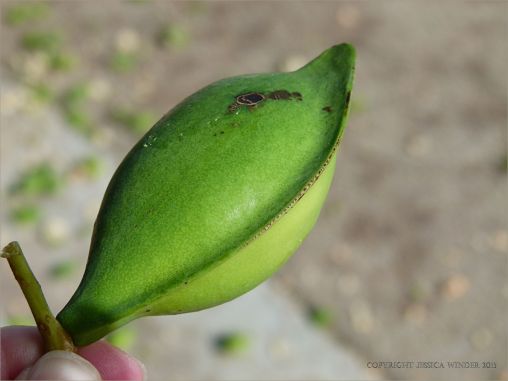 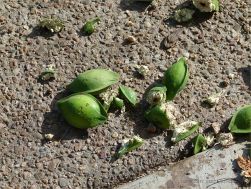