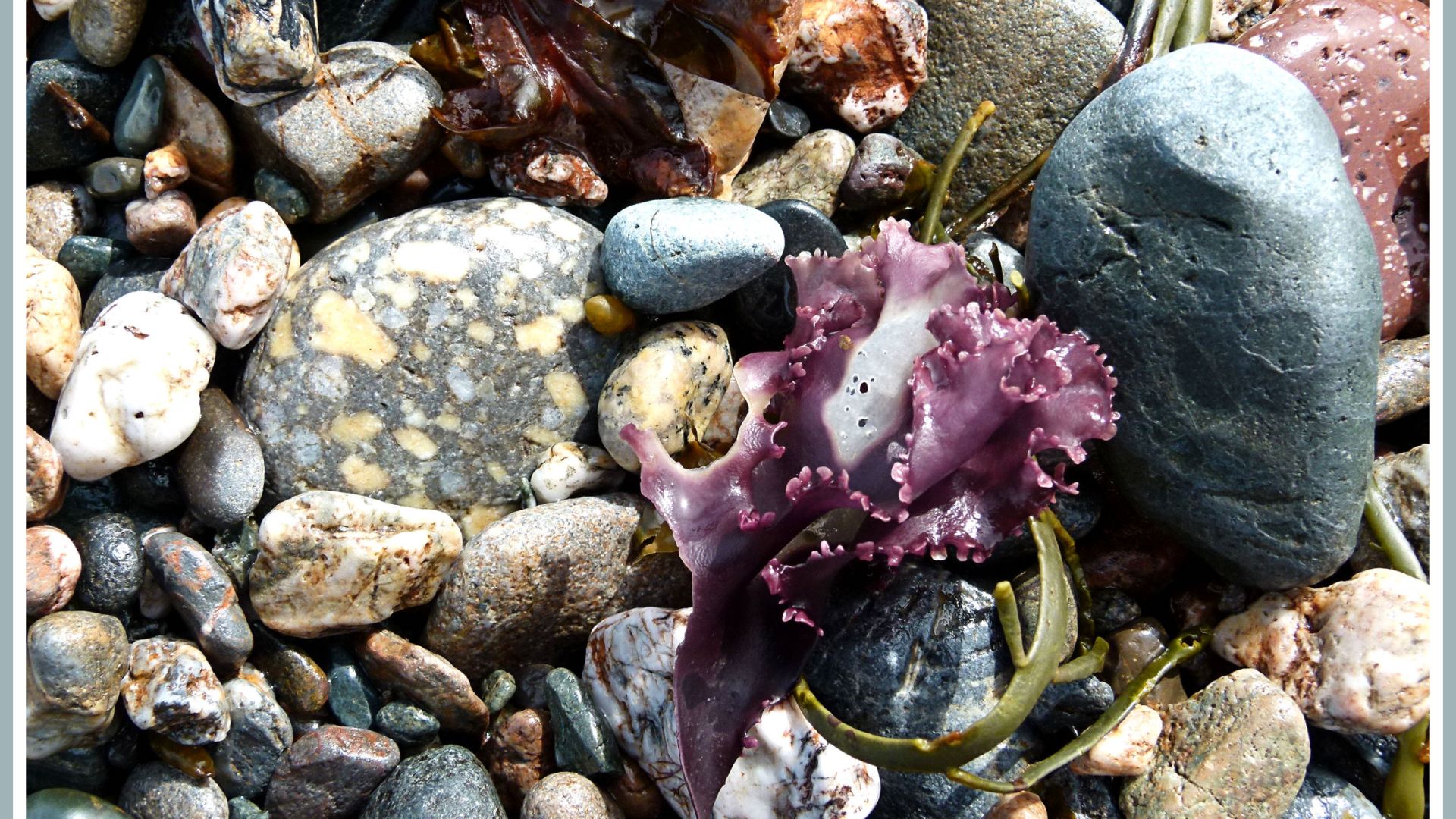 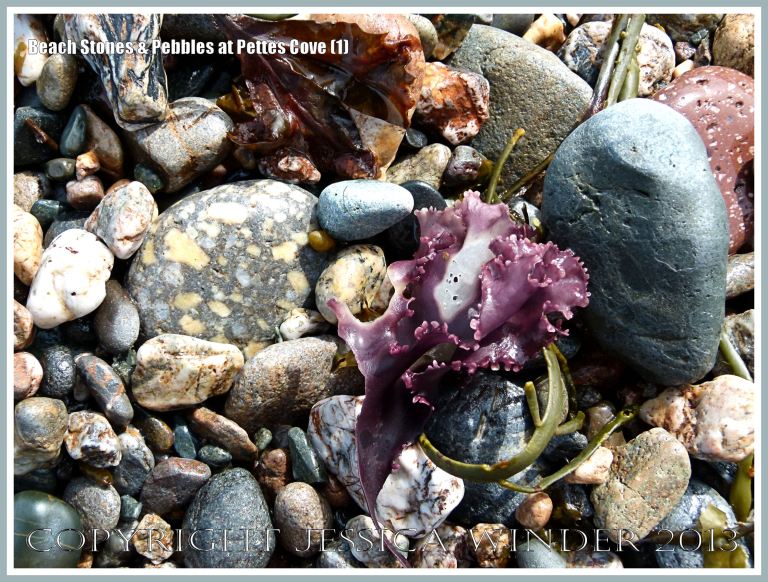 The pebbles and stones on each beach that you visit can tell you something about the geology of the area around. In June this year I visited the pebble-covered beach at Pettes Cove on Grand Manan Island in New Brunswick, Canada.

Grand Manan Island is divided by a fault from north to south. To the west, the rocks of two thirds of the island are lavas of the Dark Harbour Basalt from the Triassic Period that lasted from 251 to 201 million years ago. To the east, the rocks are much, much older and predate the volcanic rocks of the Triassic. Pettes Cove is on the eastern side of the geological boundary. It is bounded on three sides by different types of bedrock. [The following information comes from the Bedrock Geology of Grand Manan Island (Parts of NTS 21 B/10 and B/15) New Brunswick Map – Plate 2011-14]. The pebble beach itself has formed on solid bedrock of The Thoroughfare Formation which is comprised of white, medium to very thick bedded quartzite interstratified with black carbonaceous shale. This is part of the Grand Manan Group. Some rocks of this type can be seen jutting out into the water in Photograph 8 below.

Further to the east, and extending as far as Net Point, are rocks of Ingalls Formation which is also part of the Grand Manan Group and consists of greyish green to maroon, andesitic to dacitic crystal tuff and volcanic breccias interstratified with thin beds and lenses of laminated maroon mudstone, red jasper and iron formation; minor dark grey to greyish purple, feldspar-phyric mafic volcanic flows; light grey, bedded felsic crystal tuff and dark pink, spherulitic felsic volcanic flows; and greyish orange, sideritic sandstone and shale.  The Ingalls Formation together with The Thoroughfare Formation belong to the oldest types of rock on the island and date from the PreCambrian Era,  Mesoproterozoic to the late Neoproterozoic  Periods (with a zircon date of 619 +_ 6 million years ago for the Ingalls Formation).

To the north of the beach, extending to Swallow Tail Point, are rocks of the North Head Formation made up of dark grey, massive mafic volcanic flows and breccias. This is part of the Castalia Group dating from the Late Neoproterozoic to early Cambrian. The Cambrian Period lasted from 542 to 488 million years ago.

Many of the beach stones at Pettes Cove are likely to have been derived from the North Head Formation, The Thoroughfare Formation and the Ingalls Formation. In addition, stones from further away could have arrived in this location by two main means. The first is by wave action and drift from other parts of the island or from locations out to sea. The second possible source is from the glacial till that was distributed over the island about 14,000 years ago by melting ice that had previously passed over Maine in New England, and the New Brunswick mainland. 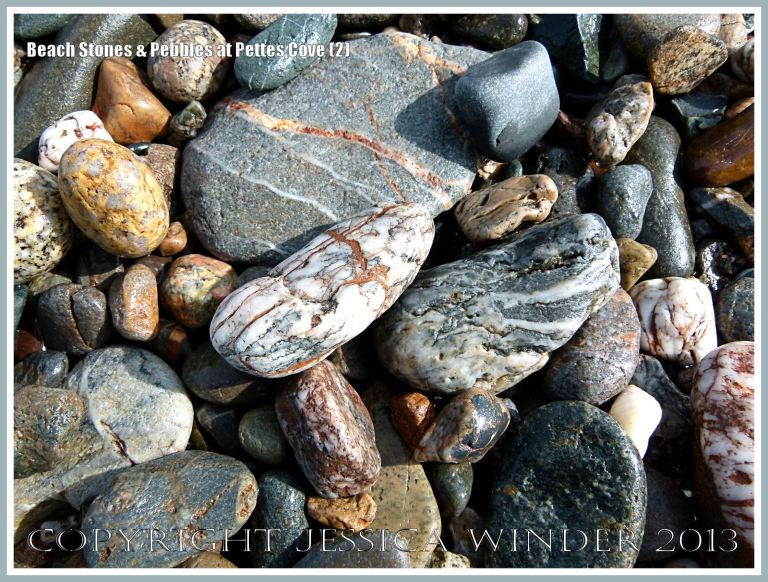 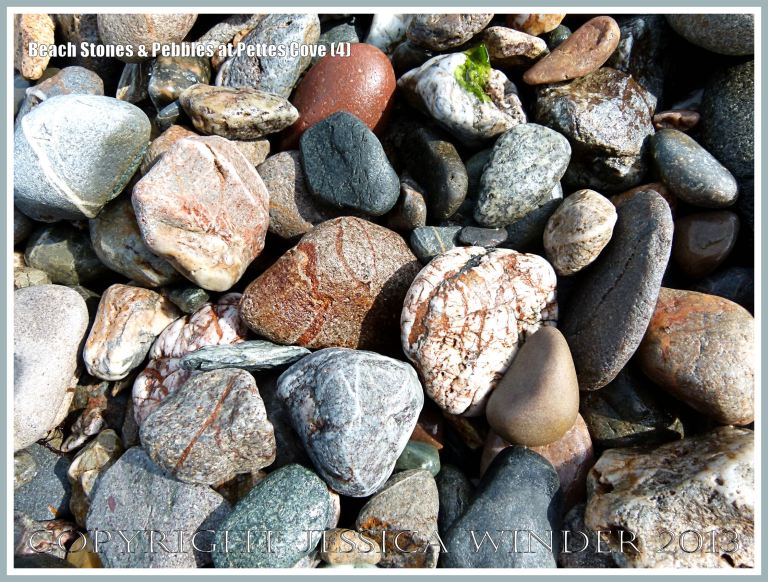 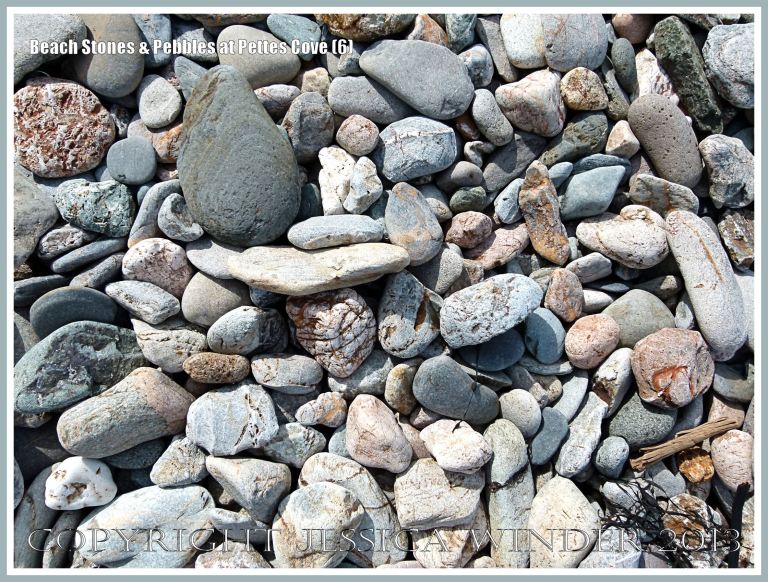