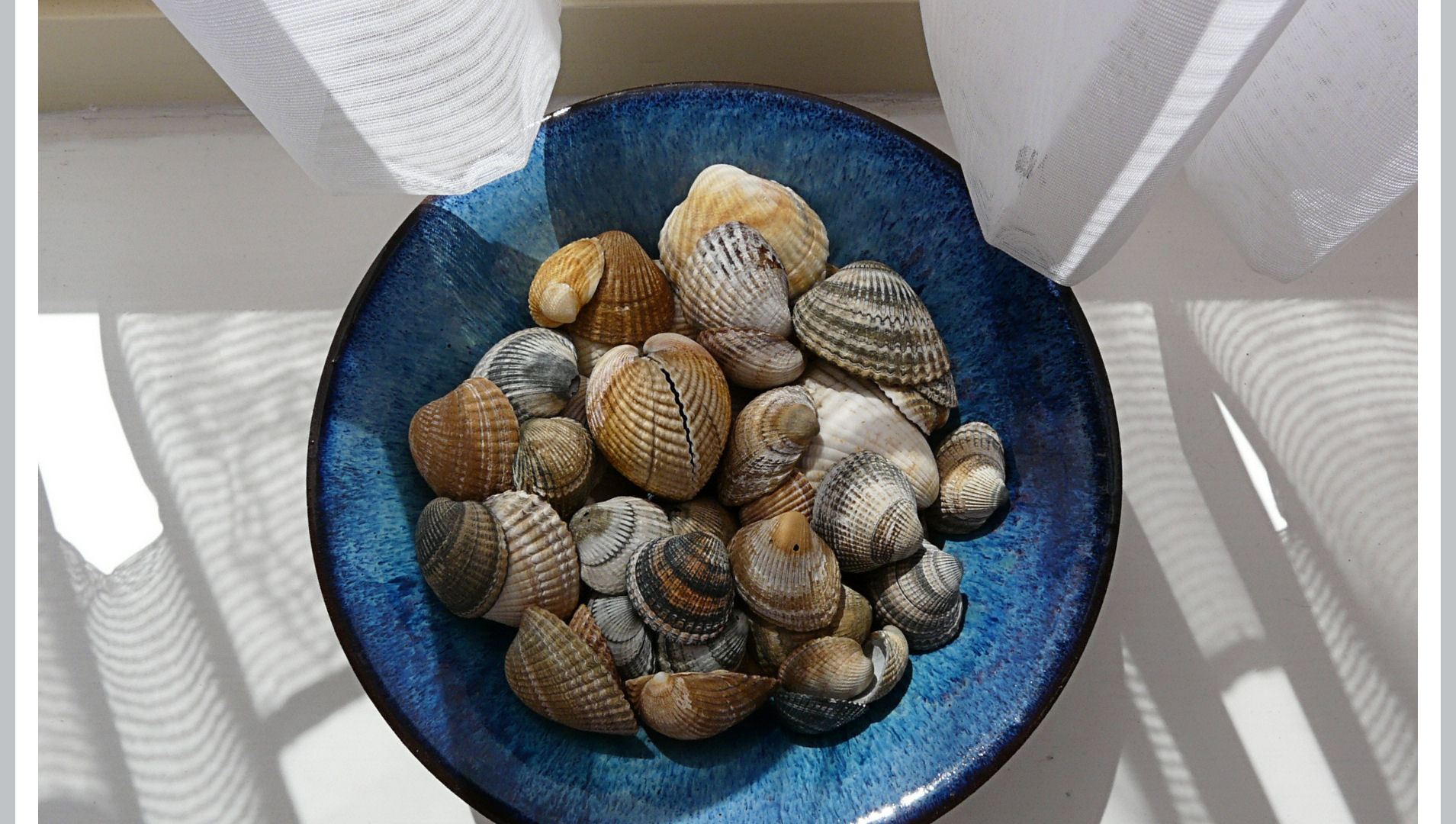 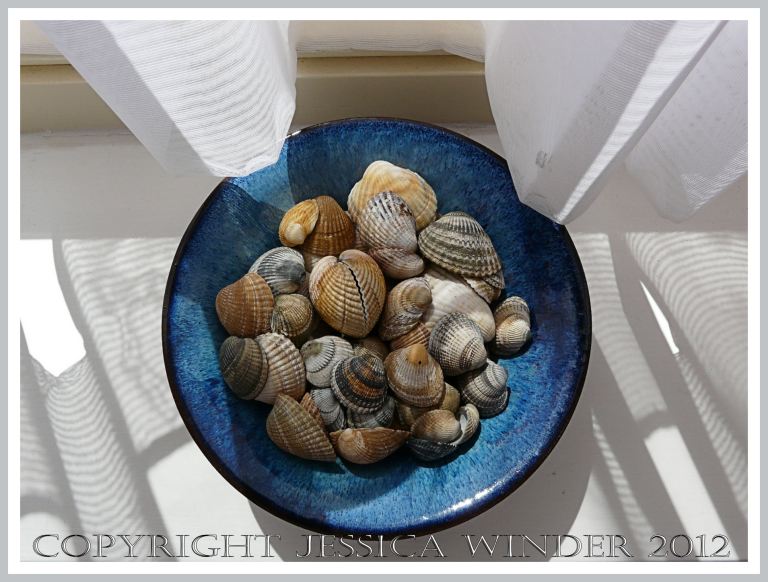 This is a bowl of different kinds of cockle shells on my window sill. Seashells seem to have a universal appeal. Like me, many people cannot resist picking up empty shells from the seashore and taking them home as a seaside souvenir. Shells come in all sorts of shapes and sizes. It is the details of the structure that provide the clues to the identity of the shell – that tell you not only what type of creature it is, and its life habits, but also give it its scientific name – one that is unique to that particular species.

Size, shape, colour, and texture all contribute to species identification in marine molluscs. Each part of the seashell has a particular name. Differences in the characteristics of the different parts can be used to distinguish between one species and another.

In this post, I am describing the some of the features of a common British bivalved shell, using as an example the basic outer parts of the Common Cockle shell – Cerastoderma edule (Linnaeus) – which are labelled in the photographs shown below. [In later posts I will explain more details about the exterior of cockle shells and then the inside of them].

Cockles are one of the best known members of the group of molluscs known as Bivalvia, also called Lamellibranchia and Pelecypoda. The soft body of the animal is enclosed by two hard calcareous valves or shells. All bivalves are aquatic (marine, brackish, and freshwater), with a structure that is an adaptation to living in softer sediments like mud or sand, but also can be modified for boring into harder solid substrates like clay, wood and stone.

We are told in British Bivalve Seashells by Norman Tebble (published by The British Museum (Natural History) 1966, ISBN 0 11 491401 X) that the shell of the common edible cockle is solid and the two halves or valves of the shell are similar in shape and sculpture (equivalve). However, the shape of the valves themselves differs from the front end (anterior) to the back end (posterior) on either side of the beak and umbo (the oldest part of the shell found in a dorsal or top position near the hinge). The valve itself is therefore asymmetrical or inequilateral. The beaks are in front of the mid-line.

The outline of the shell is broadly oval, with a continuous curve around the anterior edge or margin at all stages of growth; while the posterior margin of the shell becomes less curved as the cockle ages. The shell is a naturally a dirty white, pale yellow or brown in colour and some staining can occur from the sediments in which it buries. Cockles are marketed at about 1 inch (2.5 cm) long but they can actually grow much larger – up to 2″ (5 cm).

The outer surface of each valve has 22 – 28 radiating ribs, each with numerous scale-like spines. There are numerous fine irregular concentric lines and more pronounced concentric rings which represent shell growth increments on shorter and longer time-scales respectively.

Click here for more photographs and information about cockles.

[In an earlier post I explained some of the parts of a typical gastropod shell using the Common Whelk – Buccinum undatum Linnaeus.] 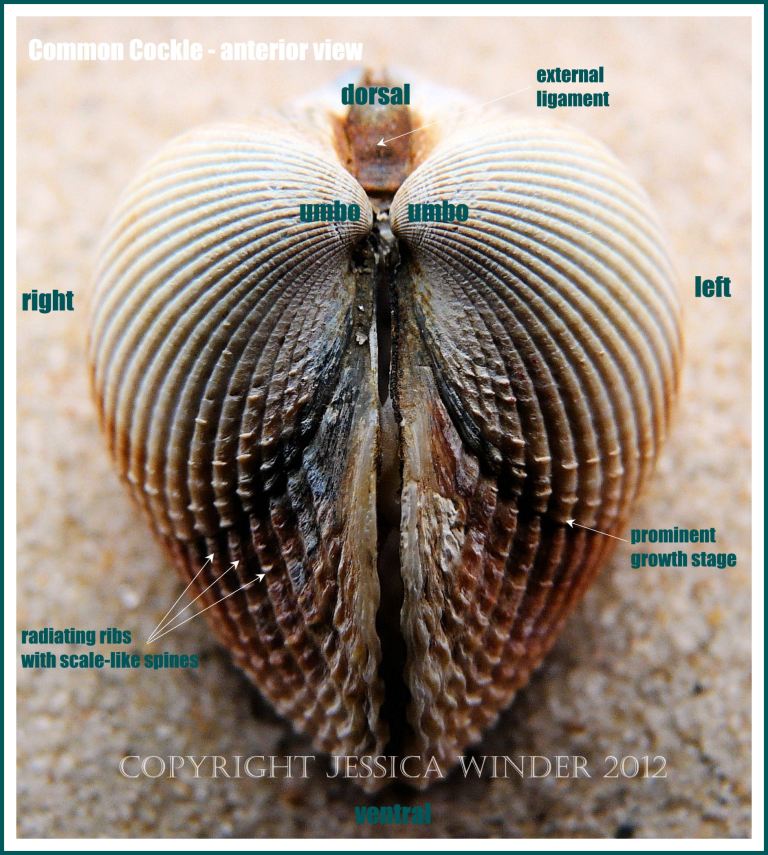 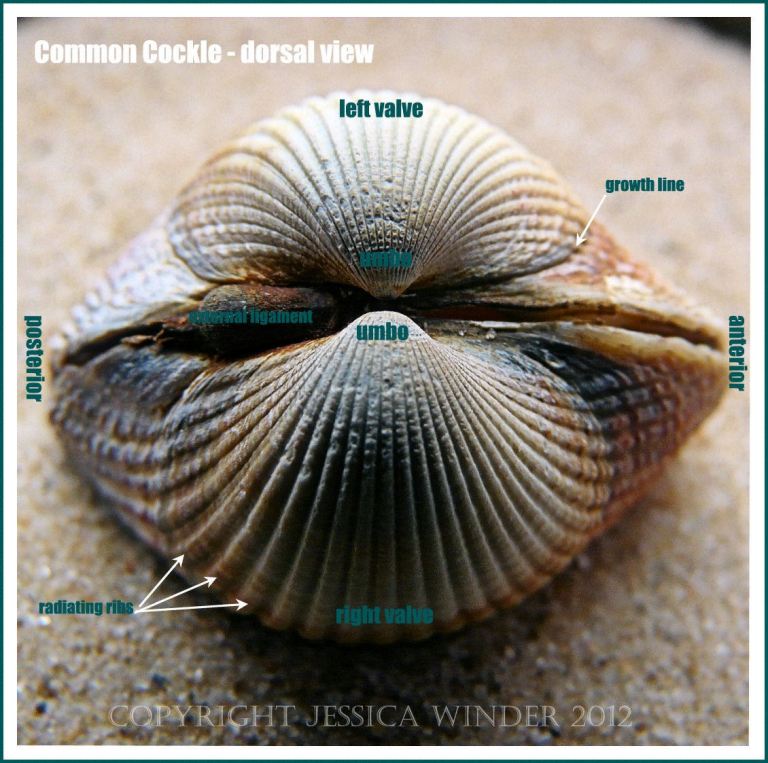 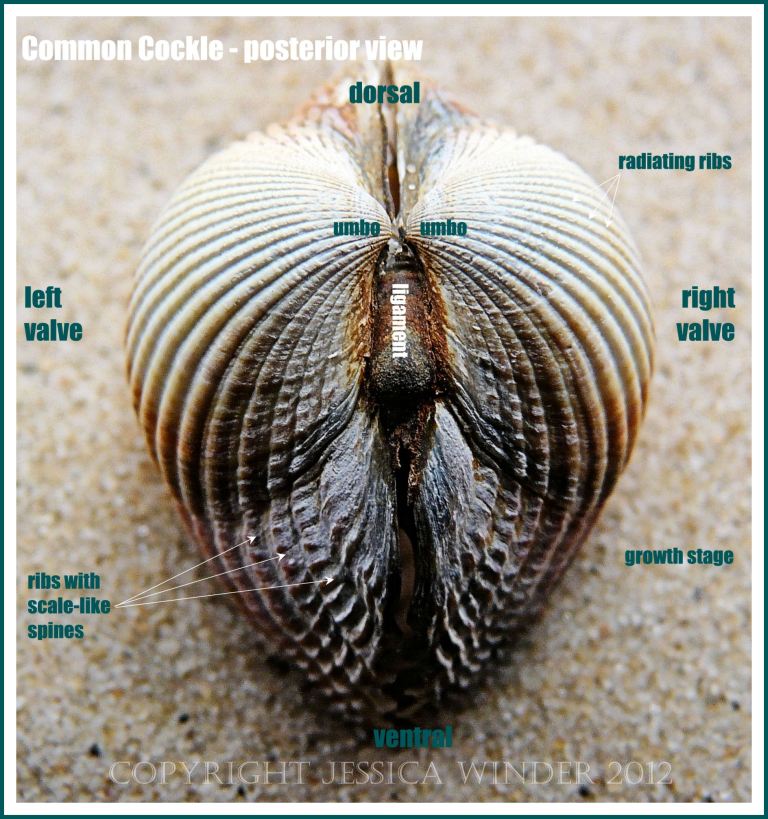 2 Replies to “Parts of the shell – Common Cockle”