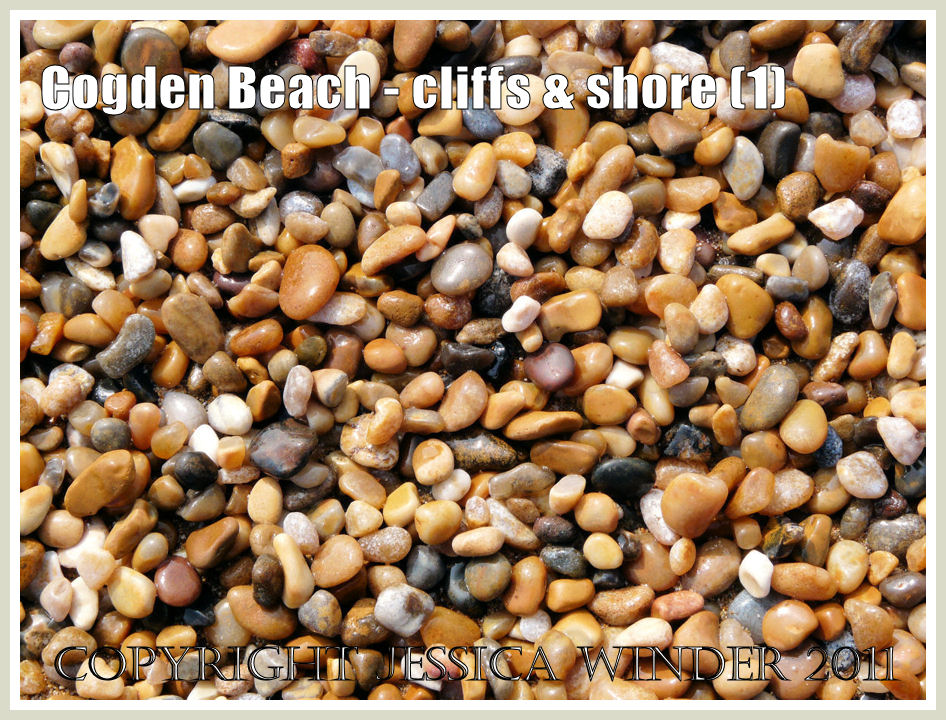 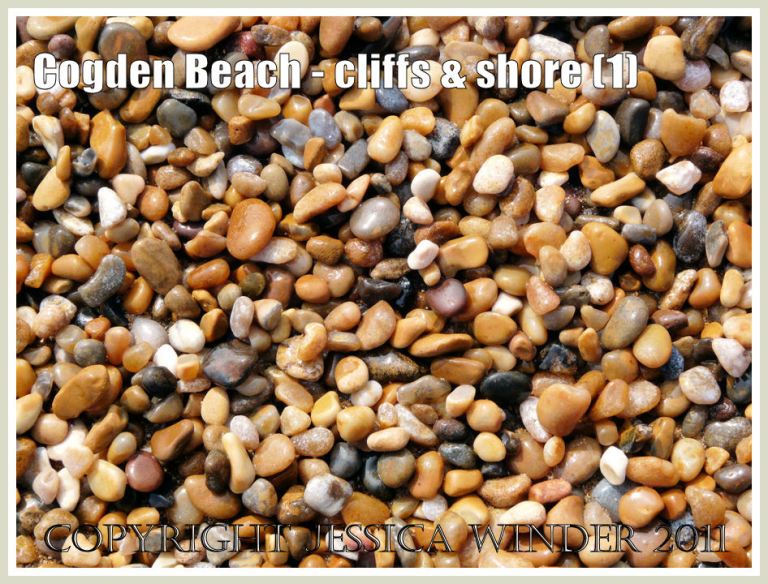 Small pebbles (little bigger than baked beans) that make up the shingle shore at Cogden Beach. Cogden lies to the west of the long Chesil Beach shingle spit and east of the high cliffs of Burton Bradstock on Dorset’s Jurassic Coast.

This is the view on a misty morning across the width of the shingle bank at Cogden Beach – sea to the right and marshes to the left of the picture. You get an idea of the scale of the beach by the two figures that you can just about see (one has a red jacket) walking along the coastal path at the boundary of the pebbles with vegetation. This shingle represents the westernmost end of the Chesil shingle spit that starts on Portland in the east.

The sun now out, walking a bit further westwards along the beach (from the access path down from the National Trust Cogden Beach car park by the main road) is a long low-lying cliff of soft crumbly Frome Clay which is part of the Fuller’s Earth Clays belonging to the Middle Jurassic Period. They are very unstable and subject to erosion and landslides. Wet areas of slippage are seen as darker patches at intervals along its light coloured face. In the picture above you can just glimpse some caravans parked on the top, a little way back from the edge. 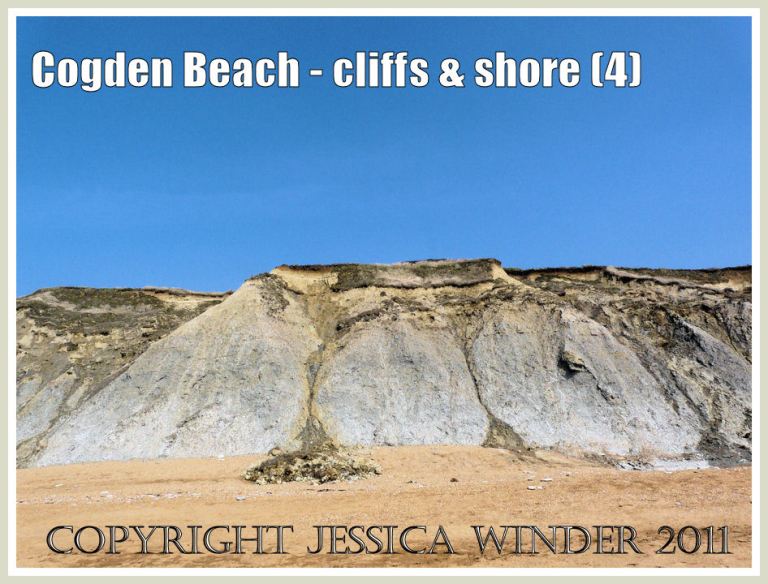 Here the clay cliffs are viewed face-on and show recent slips of rock/clay material on the shingle beach at its base.

Obviously, access for holiday makers from the caravans to the beach is problematic. A flexible rope ladder has been secured by metal stakes to the cliff top to make visits to the shore slightly easier and slightly cleaner than scrambling over the bare earth, and no doubts helps a bit to reduce further cliff erosion in this spot.

For the present, the pebble beach acts as a buffer zone preventing wave action from directly impacting upon the clay cliff  and otherwise causing undercutting and erosion. However, the shingle beach is getting smaller and narrower. In the not too distant future it may disappear.

Fewer pebbles are being deposited here on Cogden Beach than in the past because piers that have been built at West Bay apparently prevent the movement of sediments along the coast from their source in Devon. Also the sea-level is rising. It is predicted that the disappearance of the shingle will allow the sea to cut back through the clay cliffs to form a new bay at this point. So we must enjoy the beach while we can.

On a brighter note, the halfway point, and highlight, of a walk along Cogden Beach before reaching the very different geology of the tall cliffs at Burton Bradstock, is the Hive Cafe. Stopping at this reknowned little cafe is a must. It is totally excellent – as accredited by the awards it has recently received. No visit is complete for me without a large mug of coffee and a crab sandwich here. It has a great selection of hot seafood dishes as well – have a look at the Hive Beach Cafe website.

You can also find more information about the fascinating geology of this stretch of the Wessex coast on Ian West’s web pages.