Rhossili Down is a spectacular ridge that reaches a height of 193 metres at its highest point (the Beacon) and extends for much of the the length of Rhossili Beach, about 3 kilometres from the village of Rhossili in the south to Hillend in the north. It looms over the shore and provides a fantastic viewpoint.

It is immediately obvious that the rocks of Rhossili Down are very different from those seen in Rhossili headland, the Worms Head Causeway, Burry Holms and Spaniard Rocks. The Down is a mass of Old Red Devonian Sandstone that was formed between 395 and 345 million years ago in the Upper Palaeozoic Era and is therefore older and earlier than the smooth grey rocks of headlands at each end of Rhossili beach which are composed of Carboniferous Limestone that was deposited between 345 and 280 million years ago.  The Down represents the centre of a massive ancient up-folding of the rock layers into an anticline.

Pink, grey, and white quartz conglomerate rocks can be seen everywhere as outcrops and loose boulders on top of the Down. They co-ordinate well  with the tussocky acres of pink-flowered heather and ling. The exposed rocks are often colonised by grey/green lichens of various types, and also mosses. Some of the boulders lie on the ground in loosely formed circles about 10 metres across at the side of the main path. These are the remains of ancient Bronze Age burial mounds or cairns. 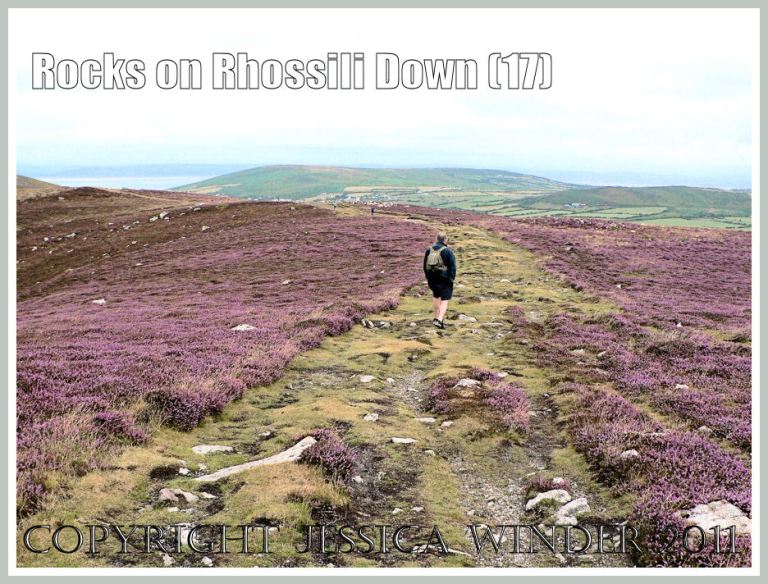