Burry Holms is an island at high tide but accessible and joined to Spaniard Rocks and Llangennith Burrows when the tide is out. It is rarely possible to walk entirely around Burry Holms even when the tide is very low – although some people can remember doing so at least once in their lifetime. However, the south-west corner of Burry Holms island, at the north end of Rhossili Bay on the Gower Peninsula, is frequently exposed right down to the sand at low tides – and a wonderland of rock formations and rocky seahore creatures is revealed. Agile anglers are already familiar with this fairly inaccessible terrain as they hunt regularly in the nooks and crevices above the waterline for suitable bait before balancing precariously to fish.

The whole of Burry Holms is composed of sloping strata of Carboniferous Limestone, laid down in oceans about 350 millions of years ago in the Palaeozoic Era. The island represents the remaining northern stump at the outer edge of a huge upheaval and folding of these rock layers. This anticline once covered the entire bay but the top of the curved mound has been worn away and flattened with time. At the south end of the bay, Worms Head and the Rhossili headland represent the remaining southern stumps of rock on the other side of the upfolding.

The rocks of Burry Holms look dark, jagged and stark from a distance but, on a closer examination, you discover that the rock is really pale gray in colour. For the most part, this light colour is obscured by different types of encrusting organisms. At low tide on the south-west shore, the bases of the rocky cliffs and outcrops are visible. Here the rock is bare: scoured clean and smooth by seas loaded with natural and man-made debris pounding away for thousands of years.

Strange shapes, hollows and bowls have been dissolved and sculpted by nature in these lower rocks. It looks as if a giant spoon has been scooping the stone. Rock pools remain in the natural bowls, providing temporary havens for stranded marine animals, and permanent sheltered surfaces for small invertebrates that attach to rock or graze it. Here you can find rows of tiny barnacles newly settled in surface cracks, rounded clusters of glistening black juvenile mussels, and roving groups of dog whelks feasting on both young mussels and barnacles before laying masses of bright yellow eggs.

If you stand on the sand and look right up the steep cliff surfaces towards the sky, bands of differently-coloured encrusting organisms can be seen clinging to the rocks higher off the ground. The most obvious of these are the lower zone blackened by maturing mussels, and the greenish-cream zone above it predominently covered with mats of adult acorn barnacles.

Rocky shore zonation describes this phenomena where various seashore creatures, with different abilities to cope with and to survive exposure to the waves and the air, become naturally arranged on the shore at various levels above Chart Datum according to their lifestyle preferences and requirements. We see these bands of colonisation and colour particularly well on steep rock surfaces. There is of course a certain amount of overlapping between the zones but overall the colour bands are distinct.

There are occasional deep clefts in the rock faces, running across and through the original layers or strata, and extending vertically many metres from beach to cliff top. I wonder if they are natural faults? These narrow fissures can trap flotsam flung forcibly from the sea – as you can see in the final photograph showing a brightly coloured fishing float wedged high and tight in the cracked rock. 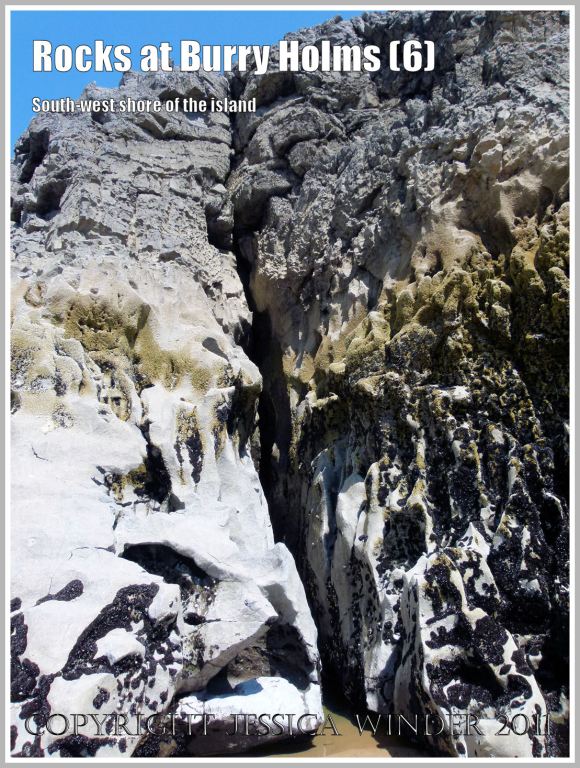