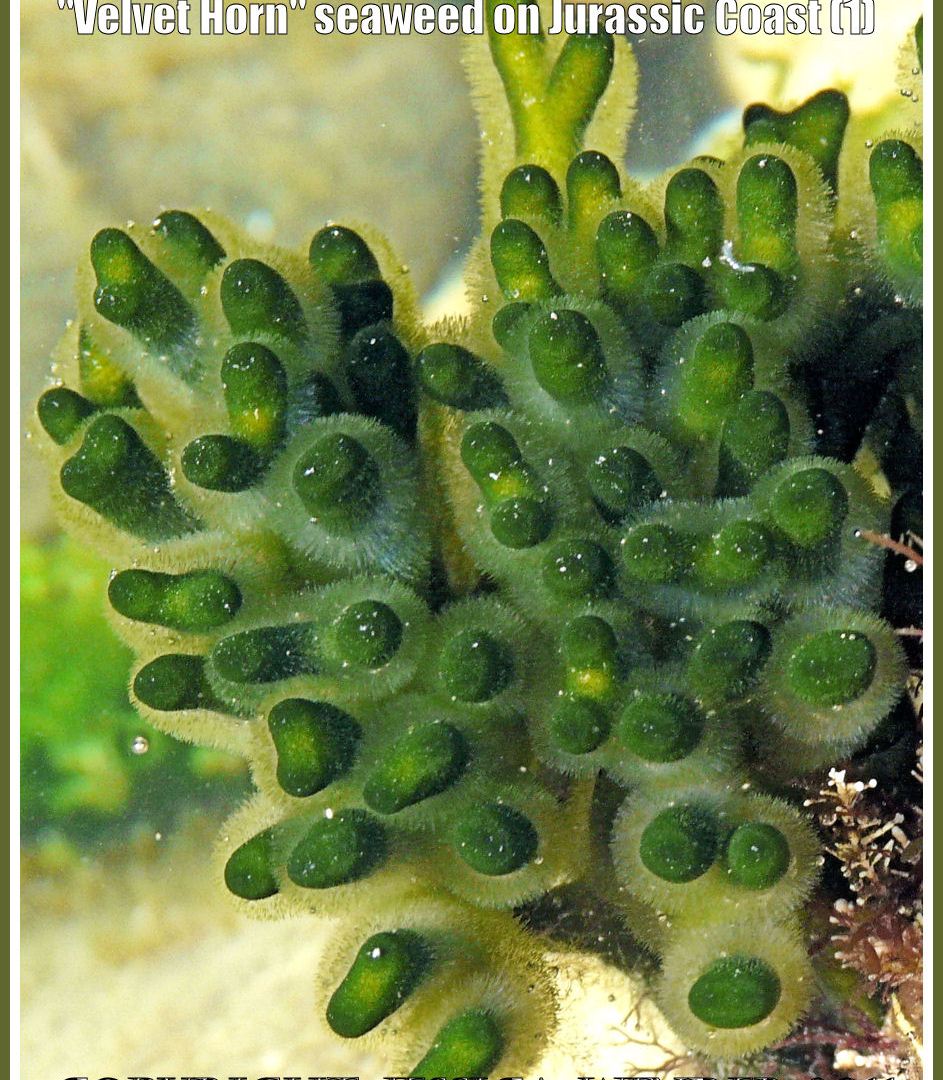 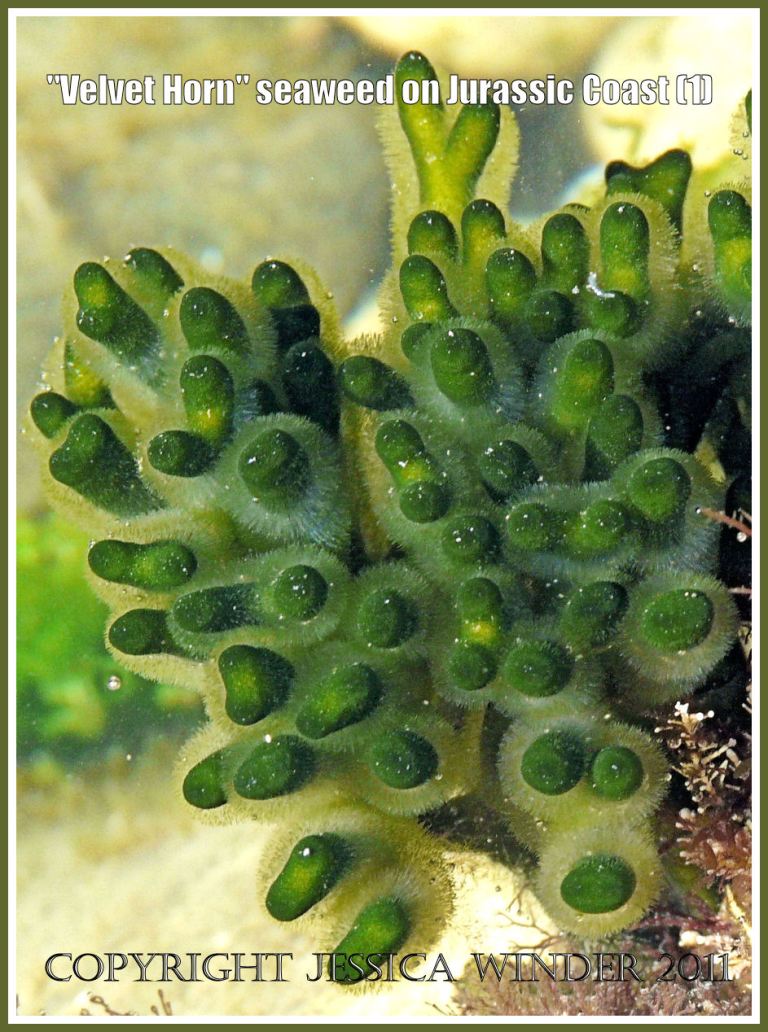 There are two types of Velvet Horn seaweed in Britain and one of them is now considered rare. I suspect that the specimens in the photographs are the less common of the two species, Codium tomentosum Stackhouse, but I can’t be sure without a microscopic examination – and I hesitated to pick a sample when there were only a few specimens.*

The quality of the pictures is not crystal clear but I risked life and limb to get the pictures of these relatively small algae growing low on the shore, in and around deep, circular rock pools. I only spotted the rather strange looking weed just as the location was being engulfed by the incoming tide – so the water was frequently in motion, the finer sediments suspended, and small bubbles were trapped everywhere. I got bruised knees and arms, as well as soaking wet trousers, as I tried to manoeuvre into suitable positions to take the shots.

* N.B. Since I first wrote this post, I have been back to the site and obtained a small piece of the seaweed. I have now examined it microscopically and can confirm that the specimen from which I took the sample is not C. tomentosum (the rare species) but C. fragile. In technical terms, the filament-bearing utricles  are mucronate (with a small sharp point at the end) and not rounded. I found many more Velvet Horns exhibiting a range of variation on my second visit and I cannot rule out that the rarer species may have been present as well but not sampled. 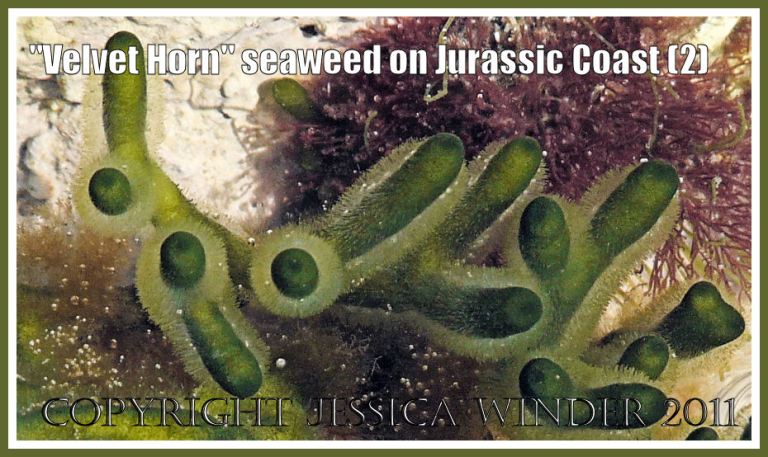 The dark green branched fronds seemed at first to glow in the seawater. On a second glance, the seaweed seemed to have been dipped in a gelatinous substance so that the light shone through the translucent outer layer, giving rise to the glowing halo effect. It was not until I enlarged the photographic image that I could see that the entire seaweed was actually covered in microscopically fine hairs radiating out at right angles to the axis of the stems or fronds.

The generic Latin name Codium is derived from the Greek word kodion which means ‘the skin of an animal’ – on account of this seaweed’s hairy covering; and the common name of Velvet Horn refers to the similarity in shape and apparent texture to a deer’s antlers when first grown and covered in velvet-like skin.

The thallus or body of the Velvet Horn is between 22 – 37 cm long when growing in pools, dark green, spongy and simply (dichotomously) branched. There is no mid-rib and in cross-section it is cylindrical with slight flattening where the branches form (the axils). Inside, the ‘stems’ are made up from vertically entwined filaments that give rise to horizontal branchlets that form a continuous layer over the whole seaweed; the fine hairs grow on this layer.

In the photograph below, you can see a small specimen of green Velvet Horn attached to the rock on the right side of a deep, almost circular rock pool within a water-filled gully. Almost the entire rock surface is covered with white, bleached, calcarous encrusting algae. The red fuzzy blobs against this pale background are large limpets covered in fine red seaweeds. The long, thin, grey threads around the edge of the pool are the tentacles of many Snakelocks Anemones. 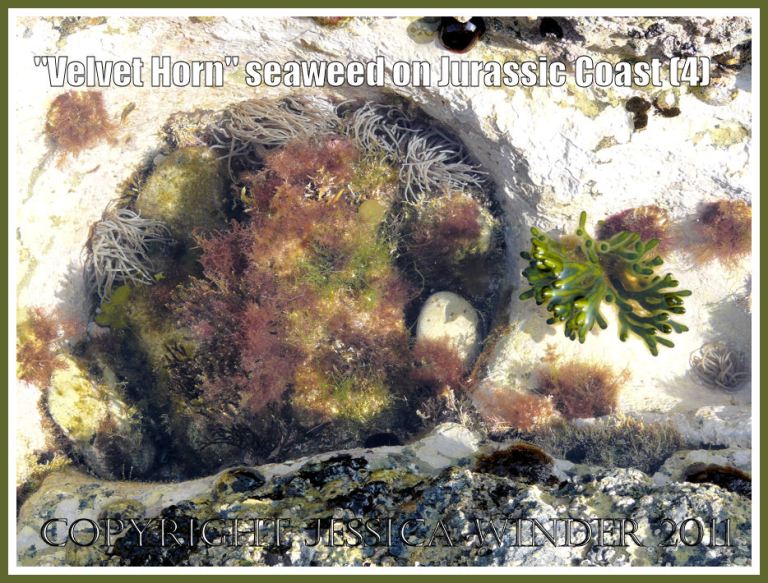