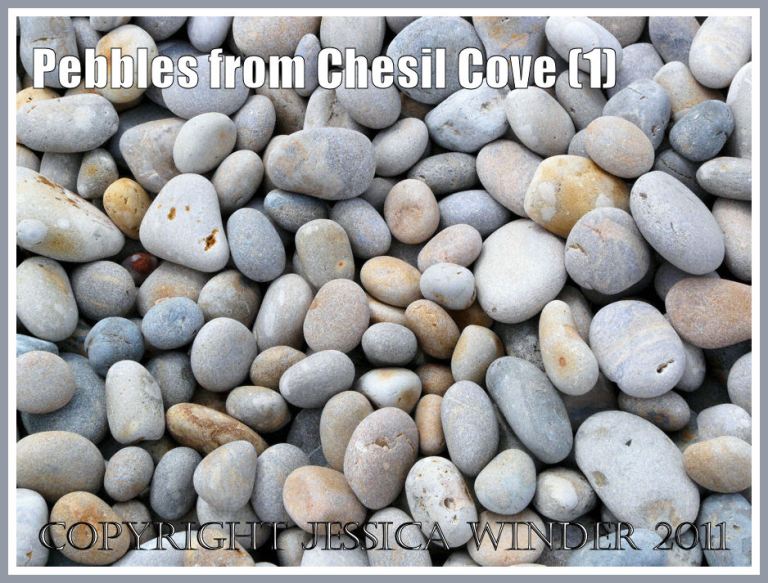 Chesil Beach is a great natural phenomenon – a huge shingle bank extending from Chesil Cove near Portland, Dorset, UK,  at its eastern end to Bridport in the west. Millions of tons of pebbles but it is strictly forbidden to remove any pebbles from the beach as they are now thought to be a basically unrenewable resource.

It is difficult to capture in a photograph the sheer scale of this spectacular feature which extends for as far as the eye can see.

At first sight, the pebbles all look more or less the same, especially when they are dry and the surfaces are dull. However, once the stones become wet, their true colour, beauty and variety is revealed. So it is well worth going right down to the water’s edge to look at them more closely. 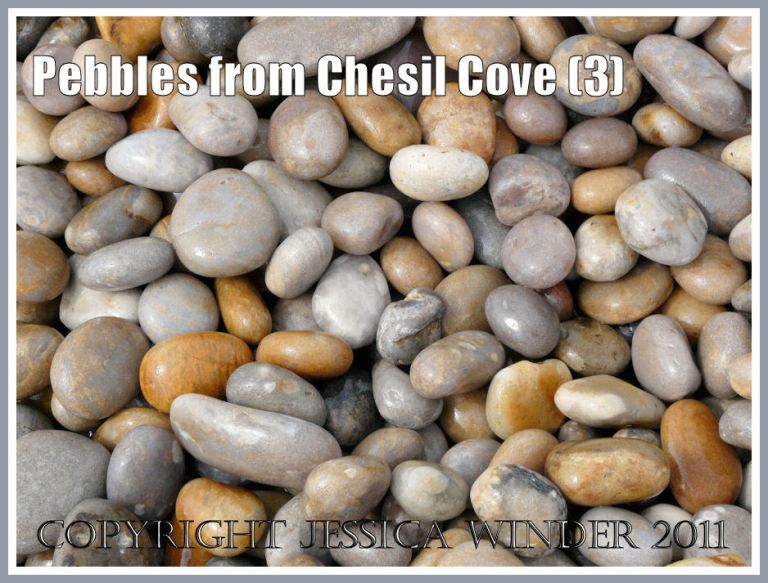 The pebbles of of the great Chesil Beach have been size sorted by natural processes so that the largest ones occur at the easternmost end of the shingle bank in Chesil Cove below the promenade. In the picture below you can see the size of the pebbles at this point relative to my walking pole.

However, a mile further on as you walk along the top of the shingle ridge from Chesil Cove to Ferry Bridge on the causeway, the size of the pebbles is considerably smaller as you can see in the picture below. By the time you get to Cogden Beach and Burton Bradstock, the pebbles on the western tail of the shingle bank are just about pea size.

Medium sized pebbles from the top of the shingle bank of Chesil Beach, one mile west of Chesil Cove, Portland, Dorset, UK (5)

Looking at the wet pebbles, the different varieties can clearly be seen. The difficult part is identifying what sort of mineral or stone gives rise to the different colours and shapes.  However, 98% of them will be either flint or chert. I have compiled a gallery (below) of a selection of the pebble types that I saw washed by the surf at Chesil Cove.

As a very rough guide to recognising the some of the various sorts of pebbles, here is a list of the possibilities for each kind of colour – but remember that there is a greater chance than 9 out of 10 that a pebble will be just flint or chert:

Yellowish or yellow-brown  – could be quartzite containing iron oxides from the Triassic pebble beds at Budleigh Salterton – and this includes strange orange patterns on a lighter background.

Slightly brownish – could be flint from Upper Cretaceous chalk with a brownish outer layer.

Medium grey – could be flint from the Upper Cretaceous chalk.

Grey to brownish – could be flint from Cretaceous chalk.

Light bluish grey – could be chert from Upper Greensand

Black – could be chert from Portland Chert Series, chert with fossils from the Portland Roach; chert from the basal Purbeck formation; or tourmalinised rocks.

Reddish or purple or liver-coloured – could be quartzite from Triassic pebble beds at Budleigh Salterton in Devon; porphyry from Permian breccia of Dawlish in Devon; or red chert from Cornish Palaeozoic rocks.

Mixed colours – could be vein quartz from Cornish Palaeozoic rocks; porphyry which has a combination of crystals and matrix with white, cream, greyish brown, and pink/purple parts; or granite with coarse grains of pink or white feldspar, grey quartz and black minerals such as mica.

Fossiliferous – could be chert from Portland series with fossil shells; flints with fossil sea urchins or cavities left by fossil sponges; or silicified shelly limestone from the Purbeck Beds.

If you are keen to learn more about the pebbles of Chesil Bank, you can do no better than consult Ian West’s web pages on Chesil Beach – Pebbles.

[I thank Dr West to whose work I have referred in order to try and identify the types of pebble and make the information more accessible to the average reader of the posting – but any mistakes or misunderstandings that may appear in what I have written are mine alone].