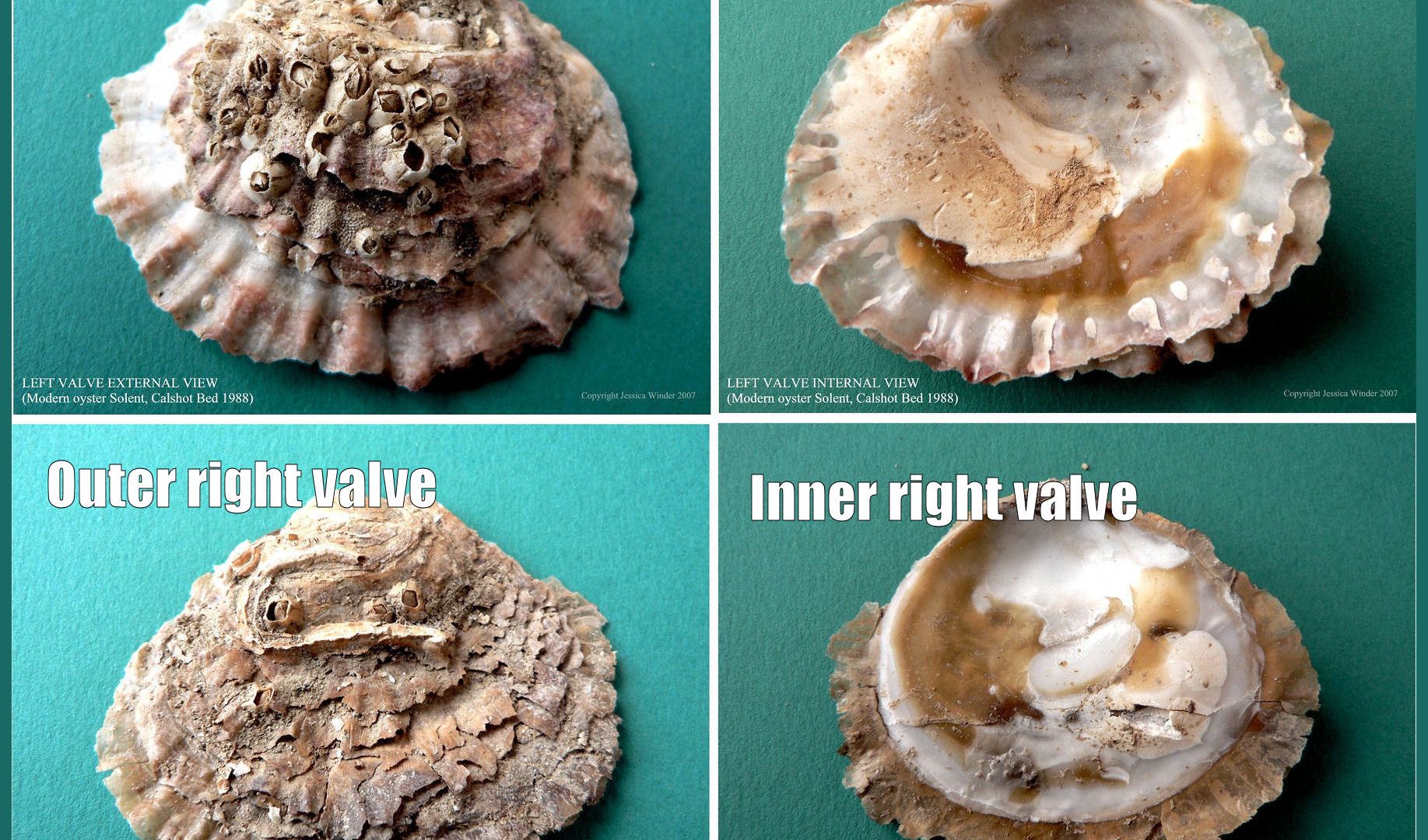 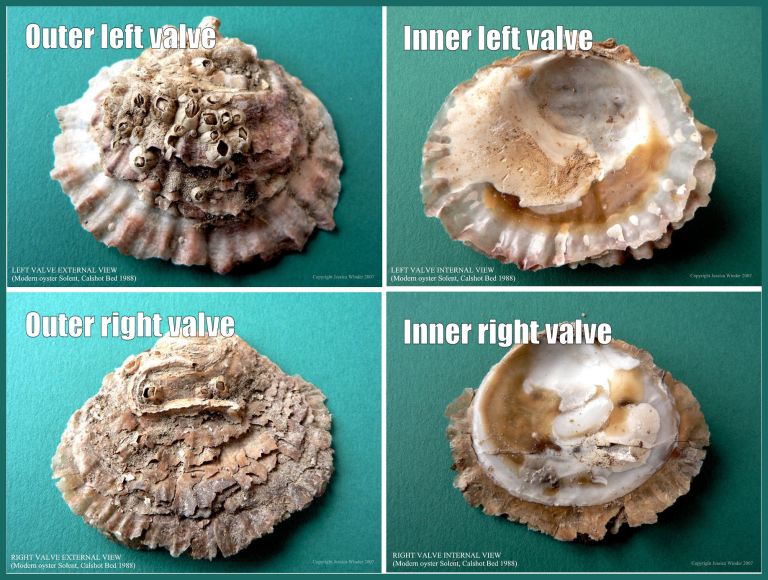 The shells of the European Flat Oyster are extremely variable but there are common features. In this post you can see examples of modern-day Flat Oyster shells: small, fresh, young ones and older beach worn ones. You can click on these photographs to enlarge them and see the details described in the text.

The photographs above (on the green back-ground) illustrate the different shapes and characteristics of the right and left valves (shells) of a single individual oyster. They show views of the outer and inner surfaces of each valve. The specimen  was dredged alive from a natural (wild) population of oysters on the Calshot Beds of the Solent in Southern England. These shells are from a small, young oyster. The shells are light and thin and the edges are sharp and fragile.

The top two pictures (above, on green) show the left valve of the oyster. This is usually the lower shell and the one by which the oyster attaches to an object when it first settles after the free-swimming stage. The left valve is usually slightly cupped or saucer-shaped – acting as a container for the meat of the living animal. The right valve is normally flattened and acts as a lid to the left cupped valve.

In life the right valve is joined to the left valve by the ligament, which is made of a tough but flexible material called conchiolin. There is a roughly triangular depression with lots of ridges on the top edge of the shell where the ligament attaches. This is the ligament scar. You can see some remnants of the brown ligament itself  in the picture of the inner right valve above.

The outer left valve of this small specimen is coloured cream with pink bands. It is sculptured with thin, concentric, frilly growth-shoots and radiating ribs. Epibiont organisms, that is, small marine creatures attaching to the outer surface, include Acorn Barnacles and Sea Mats.

When you look at the internal surface of the same shell, you can see that the new growth shoots around the margin of the shell are so thin that they are translucent. The ribs are also visible on the inner surface. Much of the interior surface is pearly white, glossy and smooth. This is the nacreous layer that lines the cavity of the shell. The yellow-orange coloured patch is a deposit of the proteinaceous conchiolin – like the material in the ligament. This substance is often used in repair and protection work for the shell. The large, dull, opaque, white and slightly powdery patch is a cushion-like deposit of micro-crystalline calcium carbonate. This kind of chalky deposit is often laid down rapidly to alter the internal shape of the shell cavity.

The photographs below (on the blue back-ground)  show a right and a left valve – not a pair from the same oyster but similar in size and age. These modern beach-worn shells were collected at Whiteford Sands, Gower in South Wales. Both the external and internal surfaces of the shells are shown. These are very mature, thick and heavy specimens with the edges and the outer surfaces worn smooth [unlike the sharp edges and detailed sculpturing exhibited by the young specimen shown above].

Both left and right valve are stained from burial in beach sediments. The right valve being coloured orange from more superficial burial. The left valve is stained dark grey or black from burial deeper down in the shore sediments. It is clear that the stain is not taken up evenly by the shell and this differential staining may by due to the varying properties of the different crystal structures that make up different parts of the shell. 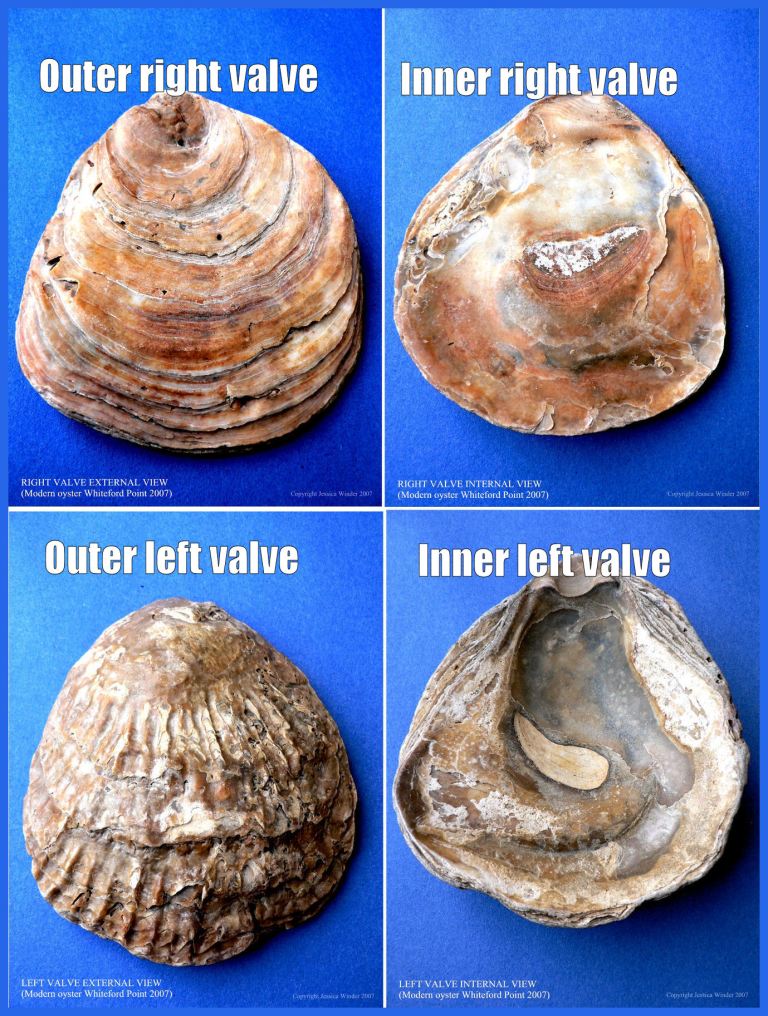 One Reply to “Flat Oyster shells: right & left, inside & out”