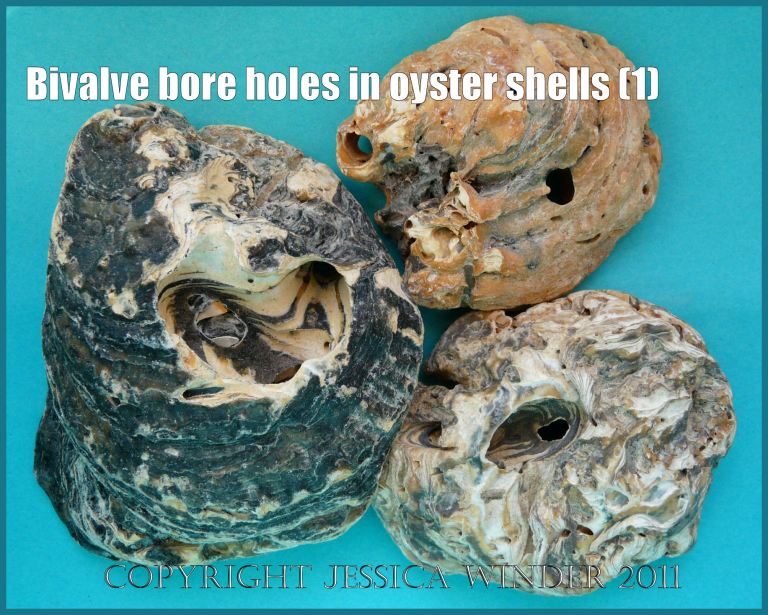 In an earlier posting I talked about pebbles with holes made by sea creatures and focused primarily on the large burrows made by boring bivalved molluscs, like piddocks, in rocks. However,  evidence of rock-boring bivalves is also found in some very thick seashells which, to the infesting organisms, seem much the same as a soft stone. In the UK, the only native species of mollusc with shells that can potentially grow very thick like this is the European Flat Oyster (Ostrea edulis L.).

The photographs show the damage caused by boring bivalves in thick, old oyster shells from Gower beaches. It is not possible to tell definitely in each instance whether the oysters were infested while still alive, or whether the empty shell has been used after death. Damage like this has been recorded in ancient Roman oyster shells, for example, from archaeological excavations in Dorchester in Dorset. This is an indication that living oysters can be infested in this way since the shells here were food remains. The most likely species responsible for this infestation damage is the Flask Shell, Gatrochaena dubia (Pennant) – this likes to bore into organic carbonates as well as sandstone and limestone.. 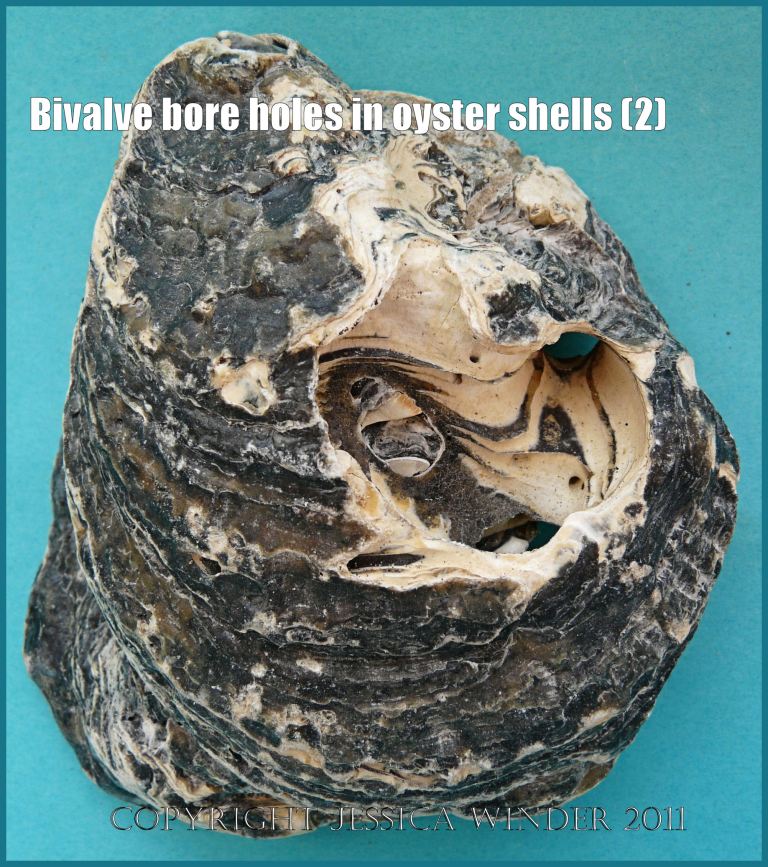 In some of the shells illustrated the burrows totally penetrate the shell. If this had happened while the shell was still occupied, then the animal would have been affected: it would have tried to lay down new layers of the type of shell that lines the internal cavity in order to protect itself – or it would have perished.

What would the Flask Shells be doing in the oyster shell? Basically, they would be using the shell (or rock) as a secure shelter. There is no deliberate aim to kill or damage the organism within. Flask Shells and other rock-borers enter a shell or rock crevice when they are small. The hole, burrow or tunnel is enlarged to accommodate them as they grow bigger. In fact, it may never be possible for the bivalve to leave the burrow because the entrance is much smaller than the animal. Empty shells are frequently found within the burrows. When this happens, it is possible to make a firm identification of the organism. When shells are absent from the burrow, a certain amount of educated guesswork (based on habitat preferences and geographical distribution) is required to suggest an identification. 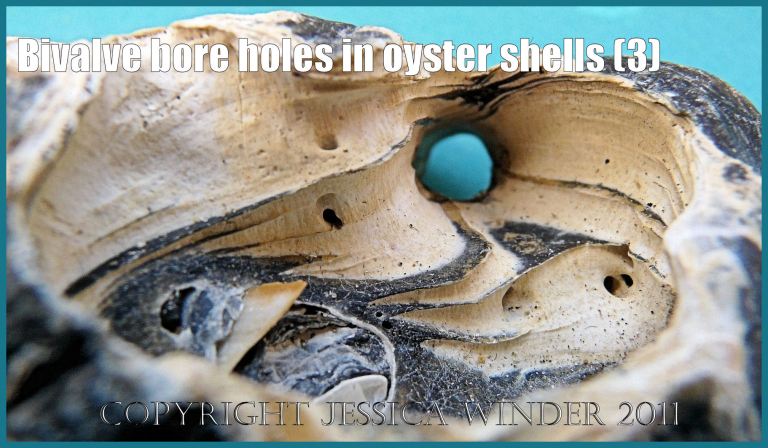 How do rock-boring Flask Shells, Piddocks and other species create the burrows? These bivalves all have specially adapted shells, sometimes very tough and sometimes fragile depending on the hardness of the substrate they prefer to burrow into. There are often sharp ridges or spines on the outer surface of the shells. These bivalves scrape away the rock or shell they occupy in an ingenious way. They all have two exceptionally long and powerful fleshy siphons (tubes) for sucking water and food particles inwards and for expelling water and waste outwards. The siphons are often so large that they cannot be retracted into the cavity enclosed by the two hinged shells. They lie along the tunnel and connect the animal to the outer watery world. The animals use hydrostatic pressure via these siphons to force their shells outwards and grind away the stone or shell in which they burrow. 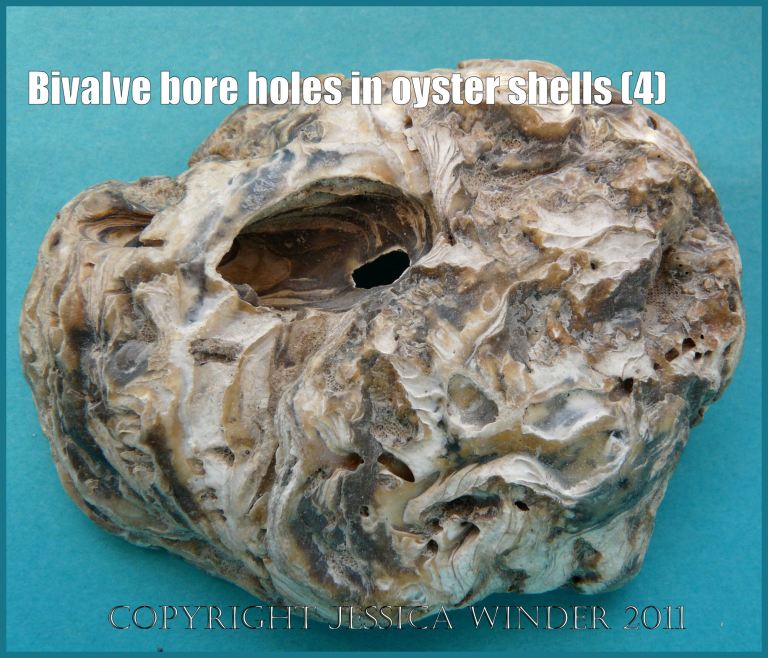 The large diameter burrows, often about a centimetre across, provide windows to observe the internal structure of the shells. You can see that the shell is made up of a sequence of layers. These layers alternate between a narrow, more resilient shell type and a thicker, softer shell form. This reflects the complex microscopic make up of the shell where different types of shell occupy different positions in the morphology, and serve various functions. Peering closely into one of these rock-borer tunnels reveals a fascinating landscape resembling the strata of the Grand Canyon. 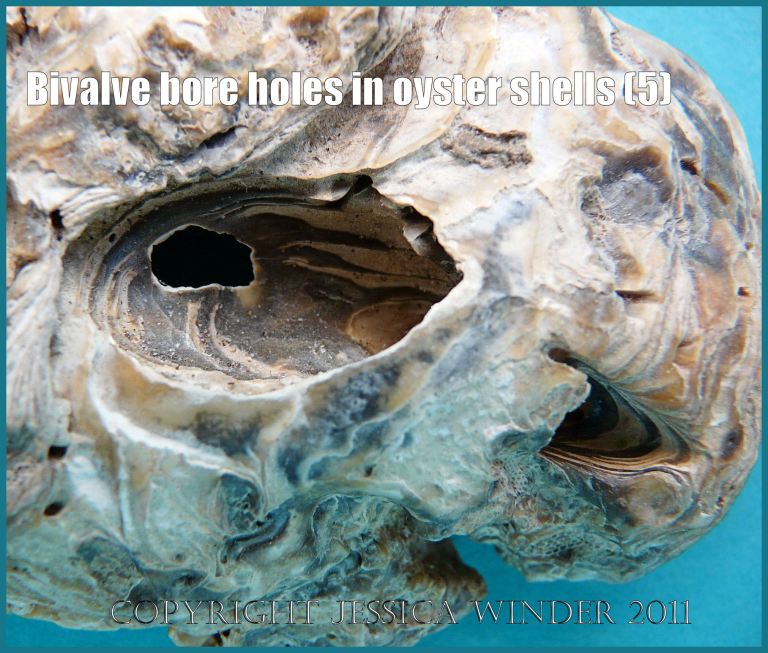 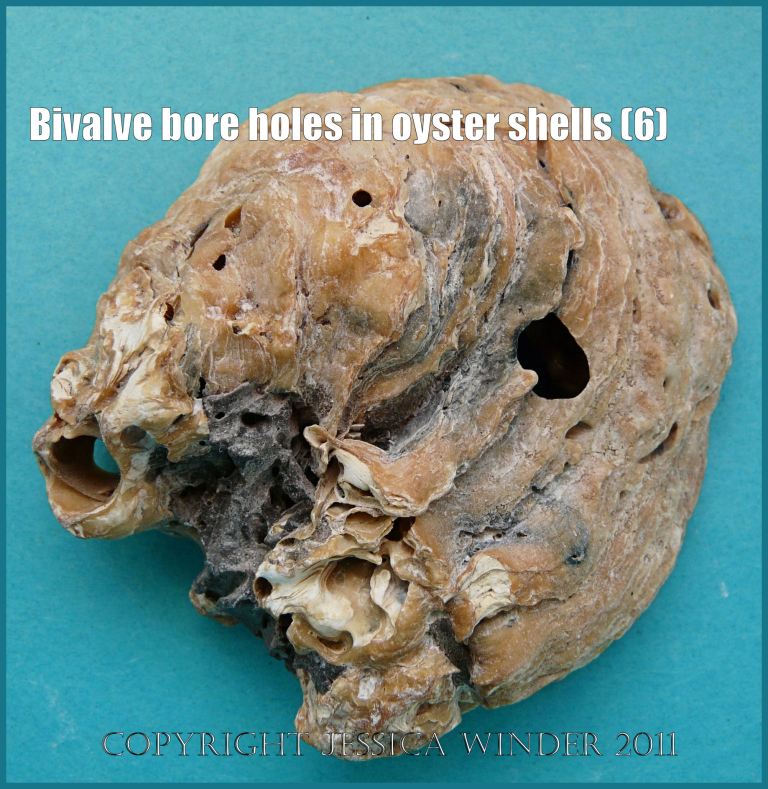 14 Replies to “Shells with holes made by boring bivalves”