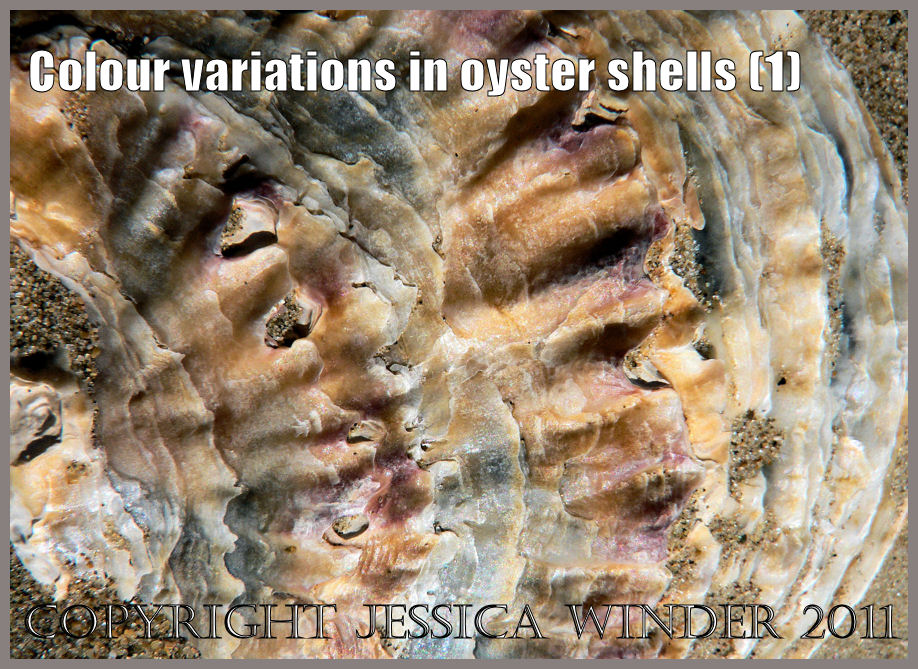 The most variable of all bivalved marine molluscs, the shells of the Common or European Flat Oyster, Ostrea edulis Linnaeus, reflect the differences in -and changes to – the local environment in which the animal has been living and growing; as well as the conditions that have affected them after death.

General details about Flat Oysters have already been discussed in the earlier post Oyster shells from Studland Bay. In this post I am going to talk about colouring in flat oyster shells. I have also briefly touched on why oyster and other shells are sometimes black. You can link to the post Black oysters at Rhossili Bay here. 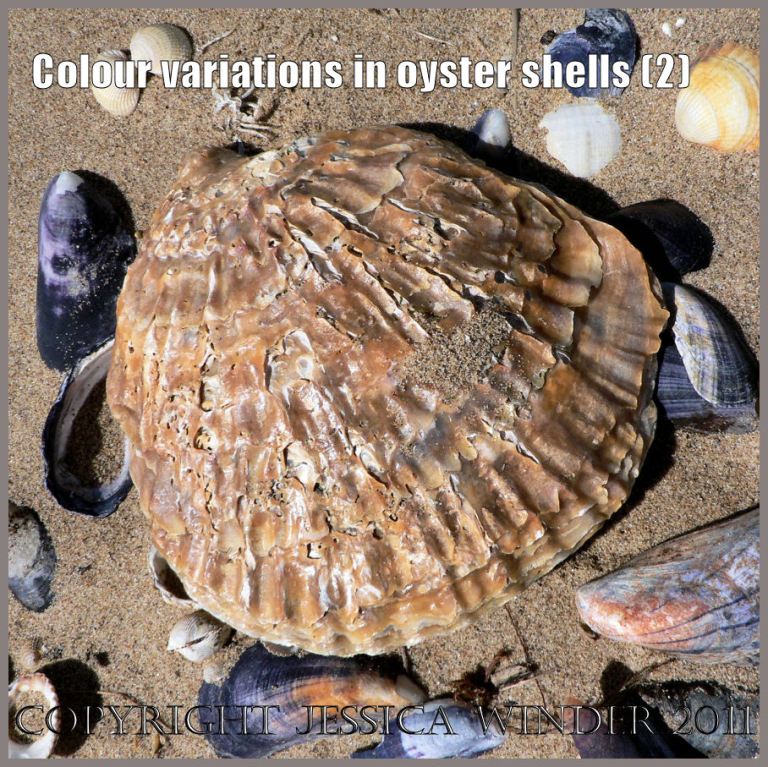 Just to recap what was said in the earlier post, the orange and black colours of empty oyster shells that you find on the beach are stains on the shell that result from burial in the sand and mud of the seashore. The deeper and the longer the shell has been lying in the sediments, the blacker it will be stained. Shells buried nearer to the surface are likely to be stained orange. Because wave action can turn the sediments over, together with the objects held in them, you sometimes find shells that are both black and orange. Shells that have only been partially buried – with a part remaining above the surface -may be partly stained orange with some of the shell remaining the original colour.

The precise depth in the sediments at which the staining will change from orange to black will depend on how far down in the loose sediments oxygen survives. As depth increases so does the likelihood of oxygen depletion. Surface layers are oxygenated but deeper layers have no oxygen and are termed anoxic. The depth of the oxygenated sediment will vary from one part of the beach to another, and from beach to beach, and from time to time. However, the boundary is usually between 5 and 15 cm down and is marked by a thin grey layer.

Bacteria live attached to the sediment particles. The kinds of bacteria vary according to whether the sediments are aerobic or anaerobic. Some bacteria can only live in the presence of oxygen; others thrive in the absence of oxygen. In the upper layers there is enough oxygen to reduce all the waste products of the micro-organisms; but lower down it is different. The activities of the bacteria react with iron compounds occurring naturally in the sediments. Anerobic bacteria use fermentation or other processes to break down organic compounds and create hydrogen sulphide, ammonia or methane as by-products. The hydrogen sulphide then reacts with the iron in the sand resulting in black iron sulphides that cause the black staining.

When the black iron sulphides are moved upwards through the sand by burrowing animals or agitation by wave action, the oxygen between the sand grains in the higher levels converts them to ferric oxide which is yellow and stains buried shells orange.

The large old orange-stained oyster shell above was photographed on the strandline at Whiteford Point in Gower, South Wales.

The thick old blackened oyster shell shown below was washed up at Rhossili Bay and is pictured on a piece of driftwood from the strandline. 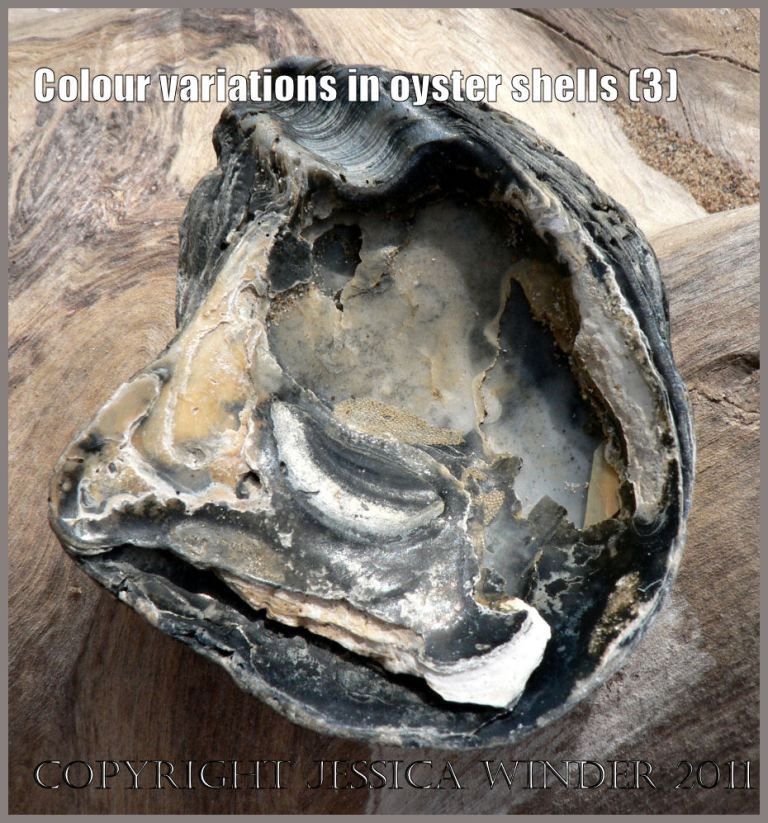 Sometimes parts of oyster shells may be coloured purple. This colouring is usually confined to patches or concentric bands. Unlike the black and orange stains which occur after the death of the animal and are due to burial conditions, pink or purple patches are part of the oyster’s natural and original colouring and develop during the life of the animal – although not all oyster shells have these colours.

In the picture below you can see an oyster shell that is mostly stained black but has purple patches as well. This specimen was seen in the surf on the water’s edge at Rhossili Bay. The pink or purple colouring survives after death and burial. The reason that the pink and purple colours remain is that they result from pigments that are bound up in the shell structure. 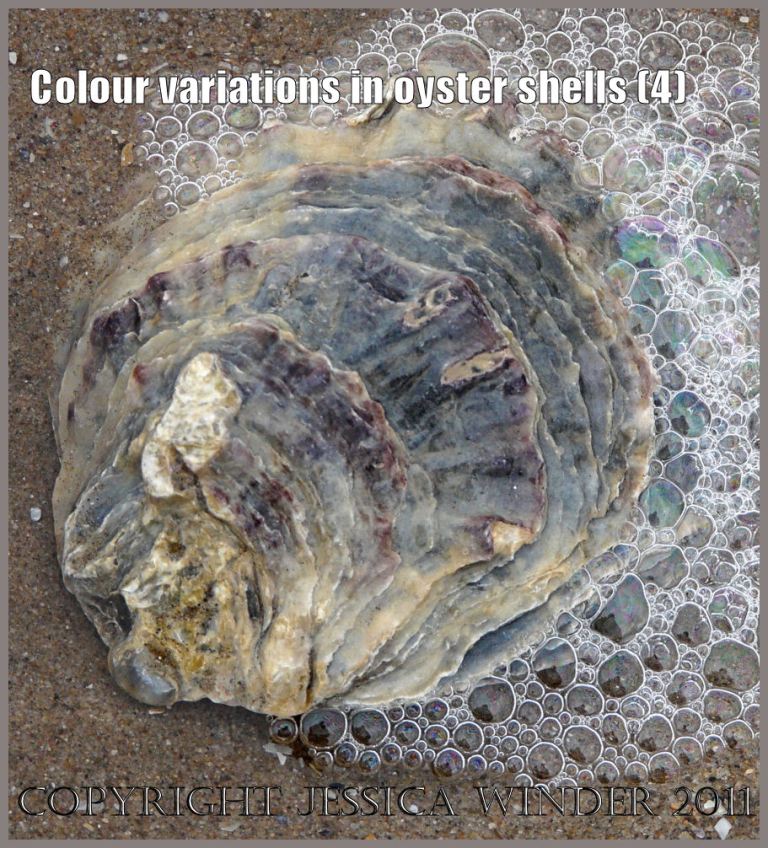 The old heavy oyster shell illustrated below was seen on Whiteford Sands, Gower, and it is coloured both black and orange with purple concentric bands and patches. 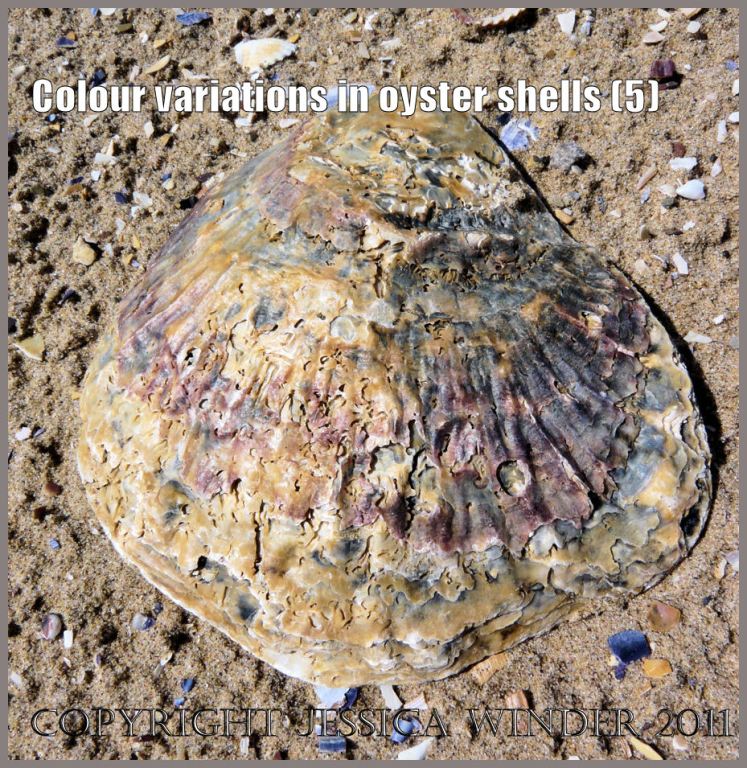 The reddish, pink or purple pigments are thought to have been derived from the food of the living oyster. It is a filter feeder, eating small particles including various types of plankton such as the microscopic organisms that constitute red tides.

As the animal grows and lays down new layers of shell (a cross-section through the shell would look a bit like flakey pastry because of all the layers), the pigments are enmeshed or incorporated into the actual crystal structures. Pigments have even been preserved, wrapped up in crystals like this, in fossil brachiopods and fossil bivalves – and have been successfully extracted for the study of the organism’s diet by palaeontologists.

The final photograph of the post shows a fine example of the survival of this purple pigmentation in bands along the outer edges of some of the annual summer growth shoots. Growth of shell in Flat Oysters is greatest in warmer weather when food is also more abundant. Believe it or not, this fresh-looking, unworn, sharp-edged oyster dates from the 9th century. It is nearly 1,200 years old and was recovered during archaeological excavations of an ancient oyster midden underneath the Old Town Cellars at Poole in Dorset, UK. 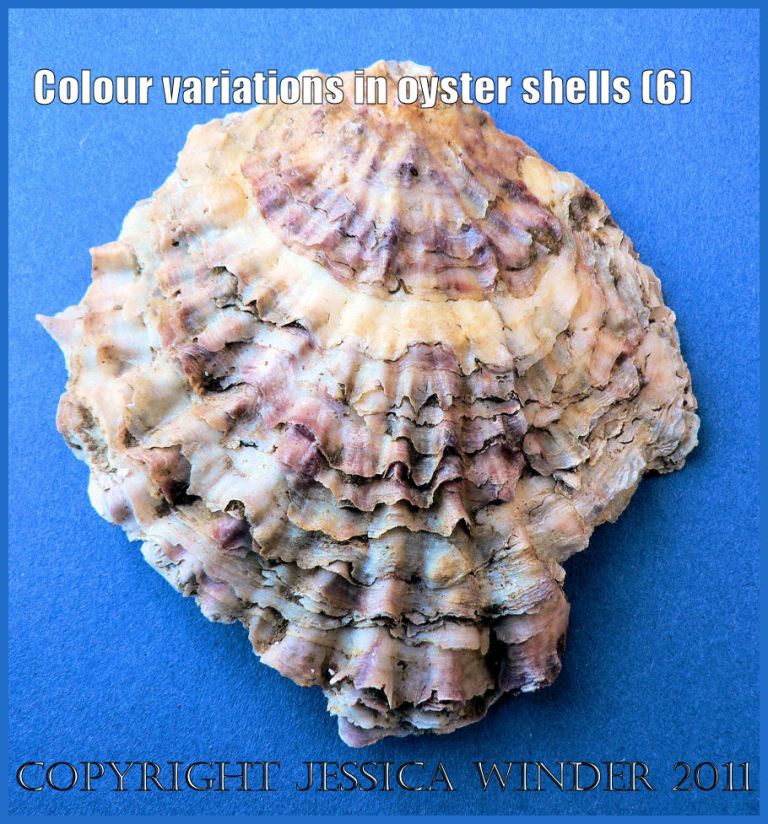